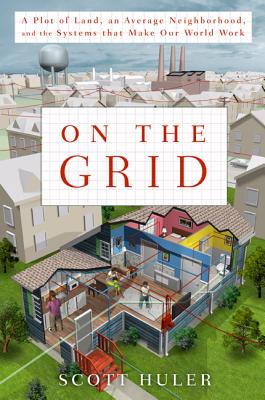 On the Grid (Hardcover)

A Plot of Land, an Average Neighborhood, and the Systems That Make Our World Work

A lively, captivating investigation into the infrastructure that makes society possible

In our daily lives, we're surrounded by wires, pipes, utility poles, cell phone towers, and a myriad of other infrastructure that facilitate almost everything we do. Even though these systems are essential, when was the last time you gave them much thought? Not only is infrastructure shrouded in mystery, much of it is woefully out of date—bridges are falling, public transportation is overcrowded, and most roads haven't been updated since the 1950s. In On the Grid, Scott Huler sets out to understand all of the systems that shape our society—from transportation, water, and garbage to the Internet coming through our cable lines.

He begins his entertaining, fascinating journey at his house in Raleigh, North Carolina, and travels everywhere from the inside of a storm water pipe to the sewers of ancient Rome. Each chapter follows one element of infrastructure back to its source. Huler visits power plants, watches new asphalt pavement being laid, and traces a drop of water backward from his faucet to the Gulf of Mexico. He reaches out to guides along the way, both the workers who operate these systems and the people who plan them.

A mesmerizing and hilarious narrative, On the Grid is filled with amazing insights, interviews, and stories that bring an overlooked but indispensable subject to life. You'll never look at your day the same way again.

SCOTT HULER is the author of six books including Defining the Wind and No-Man's Lands. Widely published in newspapers nationwide, he has also won awards for his work on NPR. He lives in Raleigh, NC.

Praise For On the Grid: A Plot of Land, an Average Neighborhood, and the Systems That Make Our World Work…

“Scott Huler’s fascinating account of his trips through the mesmerizingly crafted infrastructure that sustains our modern american lives gets us toward an understanding of a system that ought to be celebrated.” —Robert Sullivan, author of The Thoreau You Don’t Know
or
Not Currently Available for Direct Purchase
Copyright © 2020 American Booksellers Association