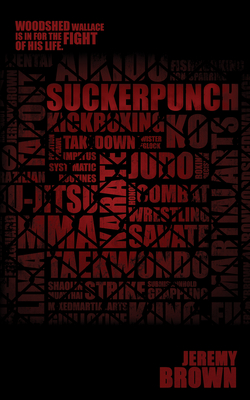 Round One in the Woodshed Wallace Series

Despite the best efforts of his trainer and mentor, 28-year-old heavyweight mixed martial artist Aaron "Woodshed"Wallace just can't move beyond the low-level MMA fight rungs. His criminal past and self-destructive tendencies have proven to be the biggest hurdle he can't seem to overcome. So when Woodshed is offered a match against the rising heavyweight star of the largest MMA organization in the Western hemisphere, he's all over it. The night before the fight, Woodshed runs into Lance, a small-time criminal from his past, and Lance's bookie Kendall. Ever the opportunist, Kendall plans to bet big on Woodshed to win; and to increase his motivation, Kendall kidnaps Lance. Blaming himself for the kidnapping, Woodshed resolves to attempt a rescue. But in order to have any chance of tracking Kendall down, Woodshed has to reconnect with a gunrunner and a drug dealer from his crime-ridden past and risk losing his big MMA opportunity.

Praise For Suckerpunch: Round One in the Woodshed Wallace Series…

"Brown . . . launches a new thriller series with this impressive first set in the violent world of professional mixed martial arts. . . . The gore inherent in no-holds-barred fighting may be excessive for some, but seasoned noir fans will find plenty to savor. The engaging Wallace is more than capable of carrying a series." Publishers Weekly (August 2011)

"This superb thriller stands a bloody head above other titles in this genre. Fans of MMA and readers who enjoy sports fiction will want a ringside seat for this one." Library Journal (August 2011)

"Between the sanctioned fights, the training for the boys, and the mob, readers will enjoy Wallace taking opponents to the woodshed." Midwest Book Review (August 1, 2011)

Jeremy Brown is the author of the Crime Files: Four-Minute Forensic Mysteries books. He is trained in Jeet Kune Do, MMA, and close-quarters combat. He lives in Michigan.
Loading...
or
Not Currently Available for Direct Purchase