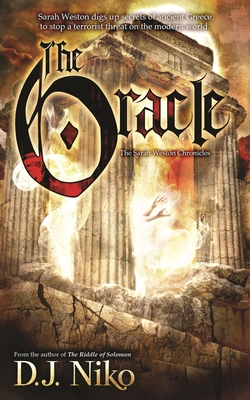 The third book of the Sarah Weston Chronicles In Delphi, the mountain city deemed by the Greek gods to be the center of the Earth, a cult of neo-pagans re-create with painstaking authenticity ancient rituals to glorify the god Apollo and deliver oracles to seekers from around the world. When antiquities are stolen from a museum in nearby Thebes, British archaeologist Sarah Weston and her American partner, Daniel Madigan, are drawn into a plot that goes beyond harmless role-playing: someone's using the Delphian oracle as a smoke screen for an information exchange, with devastating consequences for the Western world. Pitted against each other by the cult's mastermind, Sarah and Daniel race against time and their own personal demons to uncover clues left behind by the ancients. Their mission: to find the original navel stone marked with a lost Pythagorean formula detailing the natural events that led to the collapse of the Minoan Empire. But will they find it in time to stop the ultimate terrorist act?

D.J. Niko is the pseudonym for Daphne Nikolopoulos, an award-winning journalist, author, editor, and lecturer who has spent her entire adult life traveling the world. As a former travel writer and zealous adventurer, she has visited remote spots on six continents, many of which have inspired her archaeological thriller series, The Sarah Weston Chronicles. She was born and raised in Athens, Greece, and now resides in Florida with her family. Niko is currently at work on a historical novel set in tenth-century BCE Israel.
Loading...
or
Not Currently Available for Direct Purchase