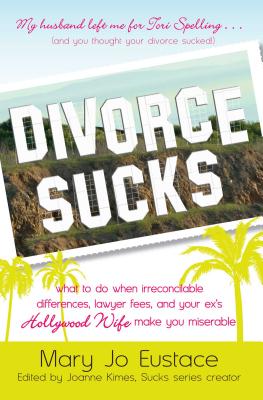 What to do when irreconcilable differences, lawyer fees, and your ex's Hollywood wife make you miserable

Hock the platinum. Take down the vacation photos. Cancel the joint checking account.

There's no question . . . Divorce Sucks. And perhaps no one knows that better than author Mary Jo Eustace, whose ex-husband Dean McDermott married Tori Spelling a mere thirty days after their divorce was finalized. One part tell-all and one part guide to get readers on their feet after a bitter breakup, this hilarious addition to the bestselling Sucks series tells everything readers don’t want to know about divorce - from what a phone call with a lawyer will cost; to how to handle your newer, younger replacement; to what Hollywood divorcees are actually thinking when they watch their ex walk the red carpet with a millionairess. Sometimes horrifying, sometimes gratifying, and never merciful, this book will give readers an inside look at one of today’s most public divorces while reminding them - hey, it could always be worse.

Mary Jo Eustace was married to Dean McDermott for thirteen years before Dean met Tori Spelling and subsequently proposed to Tori while still legally married to Mary Jo. Eustace is an actress, singer, chef, mother, and author of two bestselling cookbooks. Her television career spans fifteen years and she has been featured on Entertainment Tonight, Access Hollywood, and The Today Show. Joanne Kimes is the series editor of the bestselling Sucks series. Ms. Kimes has been married for twelve years and only considers divorce during playoff-season. She lives in Los Angeles with her husband and her daughter. Find out more about Joanne and the Sucks series at www.sucksandthecity.com.
Loading...
or support indie stores by buying on