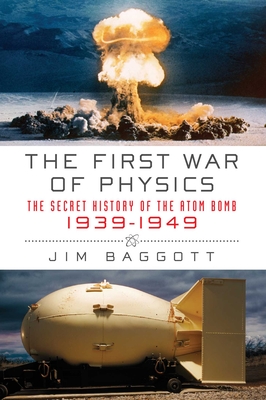 The First War of Physics

Jim Baggott weaves these threads into a dramatic narrative that spans ten historic years, from the discovery of nuclear fission in 1939 to the aftermath of 'Joe-1, ' August 1949's first Soviet atomic bomb test. Why did physicists persist in developing the atomic bomb, despite the devastation that it could bring? Why, despite having a clear head start, did Hitler's physicists fail? Could the soviets have developed the bomb without spies like Klaus Fuchs or Donald Maclean? Did the allies really plot to assassinate a key member of the German bomb program? Did the physicists knowingly inspire the arms race? The First War of Physics is a grand and frightening story of scientific ambition, intrigue, and genius: a tale barely believable as fiction, which just happens to be historical fact.

Jim Baggott is an award-winning science writer. A former academic chemist, he maintains a broad interest in science, philosophy, and history, and writes on these subjects for New Scientist and other journals. His books have been widely acclaimed and include A Beginner's Guide to Reality (Pegasus, 2006), The First War of Physics (Pegasus, 2010), The Meaning of Quantum Physics (Oxford, 1992), and Beyond Measure Modern Physics, Philosophy, and the Meaning of Quantum Theory (Oxford, 2004). He lives in England.
Loading...
or
Not Currently Available for Direct Purchase