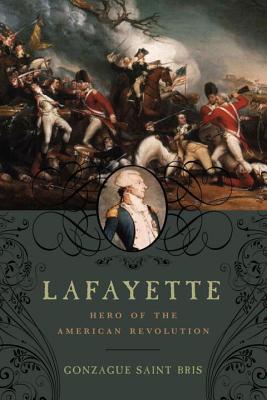 Hero of the American Revolution

The rousing story of Lafayette—aide-de-camp and “adopted son” of George Washington—exploring his vital role in the American Revolution.

In this long-overdue history of Marquis Gilbert de Lafayette, acclaimed French author Gonzague Saint Bris recounts Lafayette's invaluable contributions to the American War of Independence and, later, the French Revolution of 1789. The first study of Lafayette to appear in almost ten years, Saint Bris’ new volume recounts the young Lafayette's personal friendship with George Washington, who went so far as to refer to Lafayette as his “adopted son,” and his pivotal role as Washington’s aide-de-camp in helping establish the fledgling American nation.

Lafayette’s presence at the British surrender at Yorktown is a stark reminder of just how closely our forefather's victory hinged on the help of our French allies, who were roused into action by Lafayette himself. equally absorbing and less well known is Lafayette's idealistic but naive efforts to plant the fruits of the American-style democracy he so admired in the unreceptive soil of his homeland.

Gonzague Saint Bris, who grew up in the last home of Leonardo Di Vinci, is a novelist, historian, and journalist. his has written acclaimed biographies of Victor Hugo, Alexandre Dumas, Balzac, and Flaubert. Gonzangue recently received an honorary degree from the University of california at Berkeley. He lives in Paris.

George Holoch received a Ph.D. in French at Columbia University in 1974 and has since translated dozens of French titles into English.
or
Not Currently Available for Direct Purchase
Copyright © 2020 American Booksellers Association