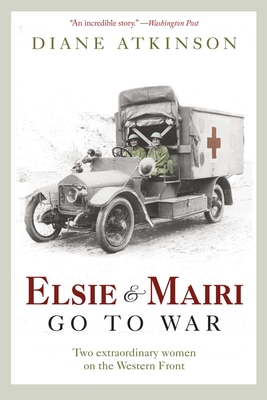 The incredible story of two courageous and spirited women who were the only female participants to serve on the western front during World War I.

When they met at a motorcycle club in 1912, Elsie Knocker was a thirty year-old motorcycling divorcee dressed in bottle-green Dunhill leathers, and Mairi Chisholm was a brilliant eighteen-year old mechanic, living at home borrowing tools from her brother. Little did they know, theirs was to become one of the most extraordinary stories of World War I.

In 1914, they roared off to London 'to do their bit,' and within a month they were in the thick of things in Belgium driving ambulances to distant military hospitals. Frustrated by the number of men dying of shock in the back of their vehicles, they set up their own first-aid post on the front line in the village of Pervyse, near Ypres, risking their lives working under sniper fire and heavy bombardment for months at a time. As news of their courage and expertise spread, the 'Angels of Pervyse' became celebrities, visited by journalists and photographers as well as royals and VIPs. glamorous and influential, they were having the time of their lives, and for four years Elsie and Mairi and stayed in Pervyse until they were nearly killed by arsenic gas in the spring of 1918. But returning home and adjusting to peacetime life—and the role of women in British society—was to prove more challenging than even the war itself.

Diane Atkinson was educated in Cornwall and London, where she completed a Ph.D. on the politics of women's labor. At the Museum of London she worked as a lecturer and curator specializing in women's history. She has an MA from the University of East Anglia and is the author of Suffragettes in Pictures, Funny Girls: Cartooning for Equality and Elise and Mairi Go to War.

Praise For Elsie and Mairi Go to War: Two Extraordinary Women on the Western Front…