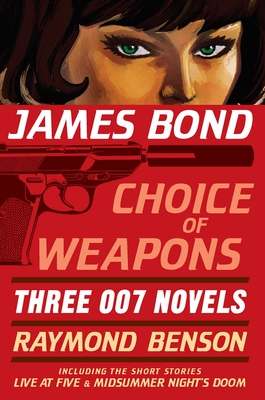 Choice of Weapons: Three 007 Novels: The Facts of Death; Zero Minus Ten; The Man with the Red Tattoo

In this new collection of James Bond novels, published in trade paperback for the first time, we are once again treated to the thrilling adventures of Fleming’s classic hero, first in The Facts of Death, which pits Britain’s famed secret agent against a fanatic cult who has murdered M’s lover; then in Zero Minus Ten, where Bond finds himself in Hong Kong to investigate a series of deadly shipping explosions; and finally in The Man with the Red Tattoo, where Bond must stop a Japanese crime ring from attempting a mass assassination with a deadly strain of the West Nile virus.

As an added bonus for the fanatical Bond fan base, the collection includes two short stories never before published in book form, "Live at Five" and "Midsummer Night’s Doom."

Through it all, Raymond Benson masterfully evokes the classic Bond flair, romance, and elan that made Ian Fleming’s novels worldwide bestsellers.

Praise For James Bond: Choice of Weapons: Three 007 Novels: The Facts of Death; Zero Minus Ten; The Man with the Red Tattoo…

Raymond Benson imbues his Bond with enough honor, sexual prowess, and action-hero skills to please the purist and enthrall the novice.

It is clear that Benson is the best of the successors to Bond creator Fleming.

Benson captures the spirit and pluck of Fleming’s 007 in his
high-flying spy thrillers.

Between 1996 and 2002, Raymond Benson assumed the mantel of writing the 007 novels. He wrote six Bond novels during that time and three film novelizations. His James Bond Bedside Companion was nominated for an Edgar award. Pegasus Books has brought Benson's Bond books back into print in two collections: James Bond: The Union Trilogy and James Bond: Choice of Weapons.
Loading...
or
Not Currently Available for Direct Purchase