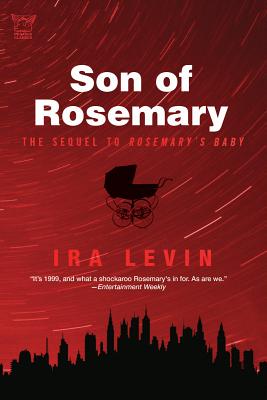 The sequel to the New York Times bestseller Rosemary's Baby: a thrilling, cautionary tale of the troubling forces that war within each of us.

The modern master of suspense Ira Levin returns to the horror of his 1967 ground-breaking novel Rosemary's Baby with this darkly comic sequel set at the dawn of the millennium. Thirty-three years ago, Rosemary gave birth to the Devil's child while under the control of a satanic cult of witches. Now the year is 1999, and humanity dreads the approaching twenty-first century, desperately in search of a savior for this troubled world. in New York City, rosemary's son Andy is believed to be that savior. But is he the force of good his followers accept him to be? Or is he his father's son? Rosemary and Andy will be reunited in a battle of wills that shall decide the fate of humanity—and keep readers on the edge of the seats until the final page.


Praise For Son of Rosemary…

Impossible to put down. Ever so subtly Levin has stripped his audience of their rational defenses and holds them in his clutches.

Ira Levin is the author of The Boys from Brazil, Rosemary’s Baby, Son of Rosemary, The Stepford Wives, This Perfect Day, Sliver, and A Kiss Before Dying (for which he won the Edgar Award). Levin was also the recipient of three Mystery Writers of America Edgar Allan Poe Awards. His website is www.iralevin.org.
Loading...
or support indie stores by buying on