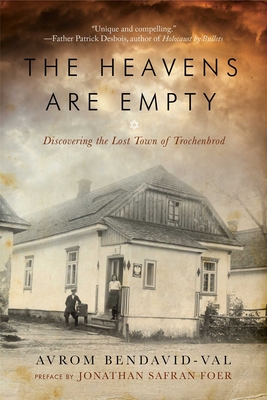 The Heavens Are Empty (Hardcover)

Avrom Bendavid-Val’s father grew up in Trochenbrod and regaled him with tales of his childhood there. Avrom specialized in economic development and has traveled the world with the U.S. Economic Development Administration and the U.S. Agency for International Development (USAID). He retired in 2007 and lives in Washington, DC.

Praise For The Heavens Are Empty…

Starred Review. Intertwining his own research with the meticulously documented, gripping personal histories of Trochenbrod’s survivors, Bendavid-Val crafts a well-researched, detailed, and eminently readable work. This is an essential read for anyone interested in religious history, the culture and history of World War II, or Jewish history, as Bendavid-Val shares not only the culture and customs of Slavic Jews before the 1930s but also the long-lasting and deeply felt impact of the Holocaust on the survivors.

A heartfelt account that resurrects a lost memory of the era.

Unique and compelling. it is more than a story about Trochenbrod; it is a story of rediscovery and redemption.
— Father Patrick Desbois, author of Holocaust by Bullets

The definitive history of this definitive place. If this book feels more fantastical than my novel, or than any novel you’ve ever read, it is because of Trochenbrod’s ingenuity, the Holocaust’s ferocity, and Bendavid-Val’s heroic research and pitch-perfect storytelling.
— Jonathan Safran Foer, from the preface
or
Not Currently Available for Direct Purchase
Copyright © 2020 American Booksellers Association