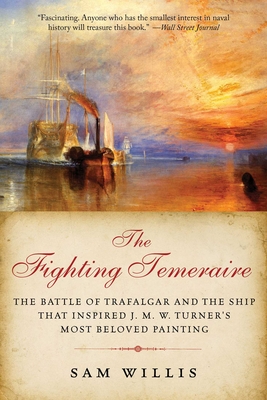 
Praise For The Fighting Temeraire…

Absorbing and enjoyable. Willis is a reliable and readable guide to the naval history embodied in the Temeraire. His book cleverly uses the microcosm of the life story of one ship to reflect the wider narrative of the decades-long struggle between Britain and France for mastery of the seas.


Sam Willis's The Fighting Temeraire is an elegant lament for the vanished warships of the world and an eloquent plea for the preservation of those still afloat… discursive and fascinating… Anyone who has the smallest interest in naval history will treasure this book.

Sam Willis has lectured at the National Maritime Museum in Greenwich, England, and consults on maritime painting for Christie's. Sam spent eighteen months as a Square Rig Able Sea-man, sailing the tall ships used in the Hornblower television series and award-winning film Shackleton< em>. He is the author of Fighting at Sea in the Eighteenth Century: The Art of Sailing Warfare and the highly successful Fighting Ships series.
Loading...
or
Not Currently Available for Direct Purchase