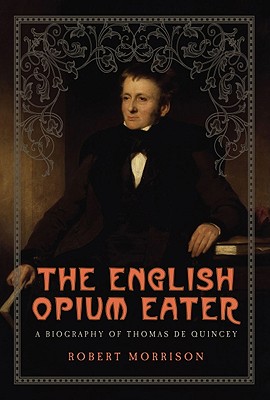 
Praise For The English Opium Eater…

This is the first biography of the writer in decades.... in fact I can't imagine anybody ever needing to do the job again. Mr. Morrison gives us an admirably lucid tour through the long, chaotic shambles of De Quincey's life.

A finely mapped study of an eccentric character best known for writing a celebrated essay that, Morrison suggests, 'offers an influential prototype for the figure of the bohemian who combines drugs, intellectualism, unconventionality, and the city.

Robert Morrison’s biography is impressive, the first biography
of De Quincey in almost thirty years, and the first to use all his
published and unpublished works.

The time was ripe for a new biography and Morrison has done his
man proud. This is an exceptionally well-balanced account.
— "Book of the Week"

I knew that I was on to a good thing with this book before the page numbers were even out of roman numerals... This was a lively life, and this is a lively life.

Morrison writes... with a combination of perspicacity and generous puzzlement... Thanks to Morrison... The life is clearer than it has ever been.

A book which is full of insight and careful reasoning... Morrison does a superb job of literary detection going through a life of lies, procrastination and deceit, and teasing out whatever truth there is to be had.

This isn't a debunking biography, just a properly skeptical one, and it's clear that Morrison's enthusiasm for the man and his writings does not obscure his judgment.

Robert Morrison is recognized as a world-class scholar of Romantic and Victorian literature. He is the editor of De Quincey's On Murder (Oxford) as well as a collection of critical essays on De Quincey (Routledge). Robert is currently a professor of literature at Queen’s University in Ontario. He lives in Canada.
Loading...
or
Not Currently Available for Direct Purchase