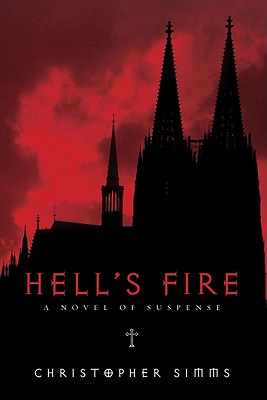 "A persuasive, original plot. Realism about the underside of modern life is combined with psychological insight in an excellent thriller."—Jessica Mann, Literary Review

The deliberate torching of a church creates outrages across Manchester, and when a charred corpse and satanic symbols are found in the smoking ruins, detective Jon Spicer and the city’s Major Incident Team are called in. Spicer quickly finds himself drawn into the depths of a horrifying religious underworld he didn’t know existed. Soon, fresh killings bring the realization that those responsible for the burnings are prepared to commit even more brutal crimes in their twisted homage to God. As emotions and paranoia flare throughout Manchester, Spicer fears for those closest to him as he struggles to halt the continuing atrocities.

Praise For Hell's Fire: A Novel of Suspense…

Simms‘ first police thriller to be published in the U.S. When
a fourth Manchester church is destroyed in an arson incident
involving Satanic rituals, Detective Inspector Jon Spicer investigates. In the smoldering ruins of the church is a charred corpse.
More murders follow, with evidence that the killer is employing
methods used in the Middle Ages to slaughter suspected witches. The killer‘s identity will surprise many readers.

Gritty, grimy and deeply absorbing, Hell‘s Fire keeps the reputation that Simms is fast earning for himself as one of the UK‘s finest exponents of the crime writing art firmly intact. This is tight, eminently readable stuff that will have the pages racing by in a whirl.