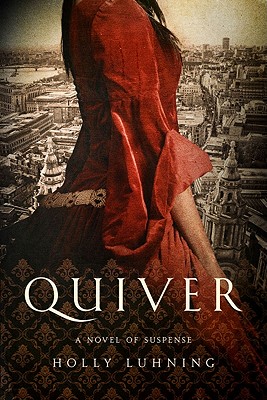 A masterful debut thriller about the original female Dracula and an underground gothic cult reenacting her ritualized killings in present day London.

In sixteenth-century Hungary, Countess Elizabeth Bathory tortured and killed over six hundred servant girls in order to bathe in their blood. She believed this practice would keep her skin youthful and her beauty immortal.

Quiver tells the story of Danica, a forensic psychologist who works at a former insane asylum-turned-forensic hospital. one of Danica's mental patients is Malcolm Foster, who is imprisoned for murdering a fourteen-year-old girl. Foster is a menacing but fascinating patient and Danica begins to suspect that Foster may have been the head of a gothic cabal idolizing Bathory. Her peers dismiss her discoveries, while disturbing incidents begin following her home from work.

Soon after her arrival in London, Danica receives a mysterious note from Maria, a seductive archivist with whom Danica has had an intriguing and complicated past. Maria claims she has Bathory’s diaries that chronicle her relentless torture of young women. As Maria increasingly insinuates herself into Danica’s life, soon Danica is in too deep to notice that Maria’s motivations are far from selfless; in fact, they may just cost Danica her life.

Holly Luhning grew up in southern Saskatchewan. She holds a Ph.D. in eighteenth-century literature, madness, and theories of the body. She has received a Saskatchewan Lieutenant-Governor’s Arts Award and her collection of poetry, Sway, was nominated for a Saskatchewan Book Award. Holly presently resides in Montreal. Quiver is her first novel and she is at work on her next thriller, Viper.

Praise For Quiver: A Novel…

The malignant spirit of 16th-century sociopath Countess Elizabeth Báthory hovers over events in Canadian author Luhning's suspenseful first novel, a modern tale of obsession and seduction…The care with which Luhning (Sway, a poetry collection) orchestrates the tale's events makes Danica's discovery of the dark side of herself and others both believable and chilling.


First-time author Holly Luhning holds a Ph.D. in the literature of 18th-century madness and theories of the body, but there is nothing remotely academic about this thriller. It is fast and wicked and dark. The writing in this novel is as clean and slick as a stiletto between the ribs.
— Antanas Sileika
or
Not Currently Available for Direct Purchase
Copyright © 2020 American Booksellers Association