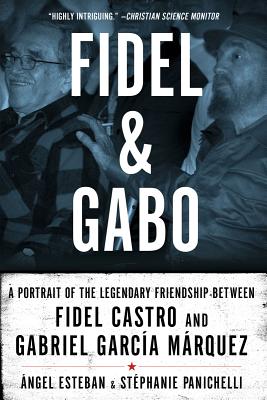 An exposé of the controversial friendship between Nobel-prize winning author Gabriel Garcia Marquez and Fidel Castro.

Few contemporary writers are more revered by Americans than Gabriel Garcia Marquez, the Nobel prize-winning author of Love in the Time of Cholera and One Hundred Years of Solitude. And few political leaders are more reviled than Fidel Castro. Yet these two seemingly disparate men are close friends. What could possibly unite these two men in friendship?

In Fidel and Gabo, Márquez scholars Ángel Esteban and Stéphanie Panichelli examine this strange, intimate, and incredibly controversial friendship between the beloved author and Cuban dictator, exposing facets of their personalities never before revealed to the greater public. For years, Márquez, long fascinated with power, solicited and flattered Castro in hopes of a personal audience, for he viewed Castro’s Cuba as the model on which Latin American would one day build its own brand of socialism. Upon their first meeting, Castro quickly came to regard Márquez as a genius and still calls him his closest friend and confidant. To this day, Márquez still gives Castro “first look” at all his manuscripts and craves his approval.

Fidel and Gabo is a vivid and in-depth look at two of the most influential men of the modern era, their worlds, and the effect this friendship has had on their life and works.


Praise For Fidel & Gabo: A Portrait of the Legendary Friendship Between Fidel Castro and Gabriel Garcia Marquez…

The Colombian’s evident fascination with Castro demonstrates that literary geniuses are not immune to the blandishments of power.

Ángel Esteban is a Professor of Latin American Literature at the University of Granada and a visiting professor at the University of Delaware. He has taught at Princeton University and at thirty other universities around the world, and is the author of more than forty books. He splits his time between New York City and Granada.

Stéphanie Panichelli studied Romance Philology at the Catholic University of Louvain in Belgium. She taught in the Department of Spanish and Portuguese Languages and Cultures at Princeton University prior to joining the Department of Modern Languages faculty at Wingate University in North Carolina in 2006.
Loading...
or support indie stores by buying on