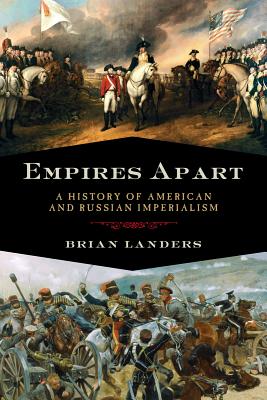 A History of American and Russian Imperialism

A fresh, commanding, and thought-provoking narrative history of the competing Russian and American empires.

The American road to empire started when the first English settlers landed in Virginia. Simultaneously, the first Russians crossed the Urals and the two empires that would dominate the twentieth century were born. Empires Apart covers the history of the Americans and Russians from the Vikings to the present day. It shows the two empires developed in parallel as they expanded to the Pacific and launched wars against the nations around them. They both developed an imperial 'ideology' that was central to the way they perceived themselves.

Soon after, the ideology of the Russian Empire also changed with the advent of Communism. The key argument of this book is that these changes did not alter the core imperial values of either nation; both Russians and Americans continued to believe in their manifest destiny. Corporatist and Communist imperialism changed only the mechanics of empire. Both nations have shown that they are still willing to use military force and clandestine intrigue to enforce imperial control. Uniquely, Landers shows how the broad sweep of American history follows a consistent path from the first settlers to the present day and, by comparing this with Russia's imperial path, demonstrates the true nature of American global ambitions.


Praise For Empires Apart: A History of American and Russian Imperialism…

An ambitious narrative history. Landers finds ‘parallels’ between the American and Russian mega-states: both spread over continents while slaughtering native peoples, built formal empires through war, and justified it all with ideology.

A provocative and worthy book.

Brian Landers recently retired as Finance Director of Penguin Books in London.
Loading...
or support indie stores by buying on