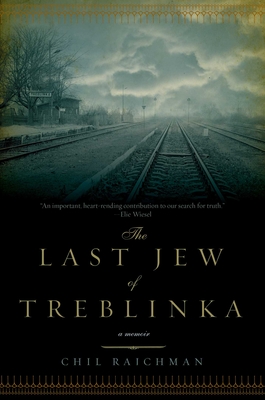 The Last Jew of Treblinka (Paperback)

Quickly becoming a cornerstone of Holocaust historiography—a devastatingly stark memoir from one of the lone survivors of Treblinka.

Why do some live while so many others perish? Tiny children, old men, beautiful girls. In the gas chambers of Treblinka, all are equal. The Nazis kept the fires of Treblinka burning night and day, a central cog in the wheel of the Final Solution.

In the tradition of Elie Wiesel’s Night and Primo Levi’s Survival at Auschwitz and The Drowned and the Saved, Rajchman provides the only survivors’ record of Treblinka. Originally written in Yiddish in 1945, without hope or agenda other than to bear witness, Rajchman's tale shows that sometimes the bravest and most painful act of all is to remember.

Chil Rajchman was born in Lodz, Poland, where he was an active member of the Jewish community. He survived for a year in the notorious Treblinka death camp and was part of the Treblinka workers’ revolt. Rajchman was also a key witness in the prosecution of a Treblinka guard known as “Ivan the Terrible” during a war-crime tribunal in Germany. He emigrated to Uruguay, where passed away in 2004.

Praise For The Last Jew of Treblinka: A Memoir…

This memoir, originally in Yiddish, is a hellish, heartbreaking account. A memorable contribution to Holocaust scholarship.

The author wrote this book in Yiddish in 1945, and he lived to give evidence against ‘Ivan the Terrible,’ one of the most notorious of the guards at Treblinka. Rajchman’s searing story, frequently narrated in the present tense, has a powerful authenticity and should not be forgotten. A Holocaust testament of heart-rending immediacy.

An important, heart-rending contribution to our search for truth.
— Elie Wiesel
or
Not Currently Available for Direct Purchase
Copyright © 2020 American Booksellers Association