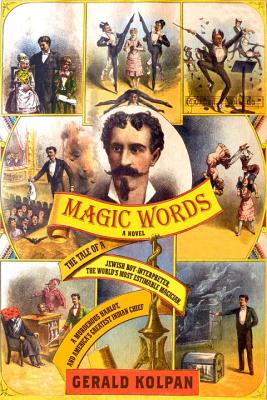 The Tale of a Jewish Boy-Interpreter, the World's Most Estimable Magician, a Murderous Harlot, and America's Greatest Indian Chief

In a riveting novel of love and adventure, young Julius Meyer comes to the New World to find himself acting as translator for the famed Indian chief Standing Bear.

Young Jewish immigrant Julius comes of age surrounded by the wild world of 1867 Nebraska. He befriends the mysterious Prophet John, who saves his life when the two are captured by the Ponca Indian tribe. Living as a slave, Julius meets the noble chief Standing Bear and his young daughter,Prairie Flower, with whom he falls in love. Becoming the tribe’s interpreter—its “speaker”—his life seems safe and settled.

But Julius has reckoned without the arrival of his older cousin, Alexander—who, as the Great Herrmann, is the most famous young magician in America. Nor does he suspect the ultimate consequences of Alex’s affair with Lady-Jane Little Feather, a glamorous—and murderous—prostitute destined to become the most scandalous woman on two continents.

Filled with adventure, humor, and colorful characters, Magic Words is a riveting adventure about the nature of prejudice,the horror of genocide, and a courageous young man who straddles two worlds to fight for love and freedom.

Gerald Kolpan, author of Etta (2009), previously was a contributor to NPR’s All Things Considered and for twenty years was the Emmy award-winning features reporter for Philly’s WXTF–TV. He lives in Philadelphia.

Praise For Magic Words: The Tale of a Jewish Boy-Interpreter, the World's Most Estimable Magician, a Murderous Harlot, and America's Greatest Indian Chief…

Kolpan deepens his inquiry into overlooked figures of the Old West in his second
historical novel, resurrecting Julius Meyer, the renowned translator for Native
American leaders, and world-famous magicians Compars and Alexander Herrmann.
Kolpan offers
sensitive revelations of the horrific suffering of Native Americans forced from
their homelands, crimes and tragedies he thoughtfully parallels with the
bloodshed and exile endured by Jews. In all, a distinctively insightful and
bewitching work of compassionate historical fiction by an adept novelist one
hopes has lots more tricks up his sleeves.

Kolpan’s novel rollicks along with a huge
cast, colorful locales, and a jolly sense of fun. An entertaining romp through the world of Victorian
showmanship of particular appeal to fans of comic westerns.