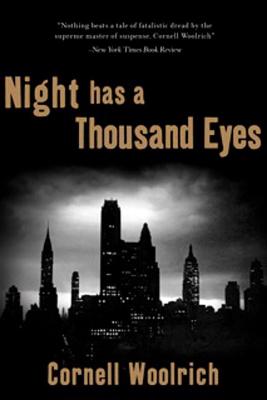 Night Has a Thousand Eyes (Paperback)

In Woolrich's iconic tale, Detective Tom Shawn saves a lovely young woman from a suicide attempt one night, and later hears her story. She is in despair because the death of her wealthy father has been predicted by a confidence man seemingly gifted with the power of clairvoyance; a man whose predictions have unerringly aided her father in his business many times before. Shawn and a squad of detectives investigate this dire prediction and try to avert the millionaire businessman from meeting his ordained end at the stroke of midnight.

One of Cornell Woolrich's most influential novels, this classic noir tale of a man struggling with his ability to see the future is arguably the author's best in its depiction of a doomed vision of predestination.

From the 1930s until his death in 1968, Cornell Woolrich riveted the reading public with his mystery, suspense, and horror stories. Classic films like Hitchcock's Rear Window and Trauffaut's The Bride Wore Black and novels like Night has a Thousand Eyes and The Black Angel earned Woolrich epithets like "the twentieth century's Edgar Allen Poe" and "the father of noir."

Praise For Night Has a Thousand Eyes: A Novel…

You can palpably feel the agony in Woolrich and his work.
— James Ellroy

The great master of the infinite terror of prosaic everyday detail.
— Anthony Boucher