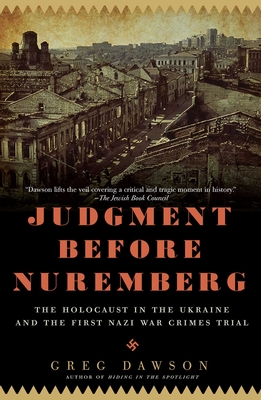 When people think of the Holocaust, they think of Auschwitz and Dachau. Not of Russia or the Ukraine, and certainly not a town called Kharkov. But in reality, the first war crime trial against the Nazis was in this tiny Ukrainian town, which is fitting, because it is where the Holocaust actually began. Judgment Before Nuremberg is also the story of Dawson’s personal journey to this place, to the scene of the crime, and the discovery of the trial which began the tortuous process of avenging the murder of his grandparents, great-grandparents and tens of thousands of fellow Ukrainians consumed at the dawn of the Shoah, a moment and crime now largely cloaked in darkness.

Greg Dawson is the eldest son of Zhanna Arkashyna. Greg has been a journalist for over forty years and has worked for a variety of newspapers, including Boston Herald and Indianapolis Star. Greg is currently a columnist for The Orlando Sentinel. He lives with his wife in Orlando.

Praise For Judgment Before Nuremberg…

Riveting and chilling. A valuable, and terrifying, glimpse into one of the more neglected aspects of the Holocaust.

In lively and engaging prose, Dawson tells the horrific story of the destruction of Ukrainian Jewry. With the keen, descriptive eye of an experienced investigative reporter, Dawson lifts the veil covering a critical and tragic moment in history.
— Michael N. Dobkowski
or
Not Currently Available for Direct Purchase
Copyright © 2020 American Booksellers Association