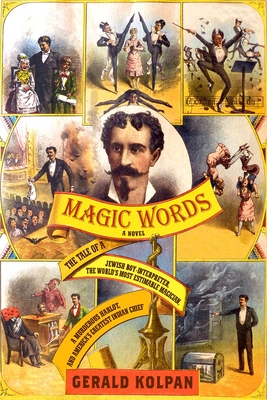 Young Jewish immigrant Julius comes of age surrounded by the wild world of 1867 Nebraska. He befriends the mysterious Prophet John who saves his life when the two are captured by Ponca Indians. Living as a slave, Julius meets the noble chief Standing Bear and his young daughter Prairie Flower, with whom Julius falls in love. But Julius has reckoned without the arrival of his older cousin, Alexander-who, as the Great Herrmann, is the most famous young magician in America. Nor does he suspect the ultimate consequences of Alex’s affair with Lady-Jane Little Feather, a glamorous-and murderous-prostitute destined to become the most scandalous woman on two continents.

Magic Words is a complicated, breathlessly plotted fictional take on the American Jewish experience unlike anything we’ve seen from Philip Roth, Chaim Potok, Saul Bellow, or Bernard Malamud . . . To quote the great prestidigitator (and actor and director) Orson Welles: ‘What makes a good magician? He’s the man who can get that rabbit out in time.’ In Magic Words, Gerald Kolpan does precisely that.


Kolpan’s novel rollicks along with a huge cast, colorful locales, and a jolly sense of fun. An entertaining romp through the world of Victorian showmanship of particular appeal to fans of comic westerns.

Gerald Kolpan, author of Etta (2009), previously was a contributor to NPR’s All Things Considered and for twenty years was the Emmy award-winning features reporter for Philly’s WXTF–TV. He lives in Philadelphia.
Loading...
or
Not Currently Available for Direct Purchase