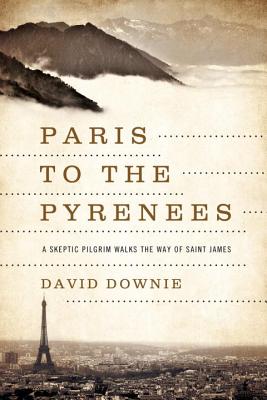 Driven by curiosity, wanderlust, and health crises, Downie and his wife walk across Paris on the old pilgrimage route Rue Saint-Jacques then trek about 750 miles south to Roncesvalles, Spain. The eccentric route would take 72 days on Roman roads and The Way of Saint James, the 1,100-year-old pilgrimage network leading to the sanctuary of Saint James the Greater in Spain. It is best known as El Camino de Santiago de Compostela - The Way for short. The object of any pilgrimage is an inward journey manifested in a long, reflective walk. For Downie, the inward journey meets the outer one. More than 20,000 pilgrims take the highly commercialized Spanish route annually, but few cross France. Downie had a goal: to go from Paris to the Pyrenees on age-old trails, making the pilgrimage in his own maverick way.

Praise For Paris to the Pyrenees…

In the tradition of Patrick Leigh Fermor, David Downie
takes off on foot. Such a rigorous, slow journey—the polar opposite of
airport-to-airport travel—gives him the gift of time, and the chance to absorb,
taste, and experience the places he sees. Downie’s adroit, learned, and
ambitious book re-invigorates my sense of travel, taking me back to the happy
knowledge that the world is still large, and history unfathomably deep.
— Frances Mayes, author of The Tuscan Sun Cookbook and Under the Tuscan Sun

A witty and
intelligent spin on the spiritual-journey motif.

Evocative and moving… Downie’s quest is unconventional in tone and spirit as well as route. A lively wordsmith, Downie brings a deep and impassioned knowledge of French history, culture, and language to this pilgrimage. He also brings something more, a longing that he himself can’t pin down at the beginning… they encounter a memorable succession of taciturn, deep-rooted local farmers and gregarious, transplanted-from-Paris innkeepers. They also encounter the multi-layered, interweaving pathways of French history, commerce, religion, and spirituality—and manage to tuck in a few sumptuous celebrations of French food and wine, too. The result is an extraordinary account that illuminates France past and present and casts a light on something even greater: the truth that, however we choose to label our journey, we are all pilgrims on a common quest, to answer why we wander life’s question-paved path.

Bristling with knowledge and often with theinsights of good fiction, Downie takes you on a trip that is as much acompelling intellectual journey as it is a rich revelation of place. It’s ahard book to put down.
— G. Y. Dryansky, author of Coquilles, Calva and Creme

A great writer and a very interesting trail, what more could you want?
— James Martin

Richly textured, meticulously detailed, a compelling, picaresque
narrative of adventures on the road and a sophisticated meditation on the past,
present and future of France.
— Sandra M. Gilbert, author of Kissing the Bread

Richly
illustrated with Alison Harris’s color photographs, it is not only a
fascinating journey through France on foot, with illuminating glimpses
into French history from prehistoric times to the present. Downie also
shares his idiosyncratic observations and provocative musings about
connections between the Roman and American empires, the character of
Francois Mitterrand, and the shadow of both Nazi collaboration and the
French Resistance. It is also an intimate, personal journey, the author
sharing his candid ruminations. There are moments of comedy, many grins
and even some laugh-out-loud moments. A word of advice? Don’t peek!
Every page of this book is worth reading, and in order to understand the
ending, you’ll have to have been there for the whole journey.
— Janet Hulstrand

A wonderful book: historically, culturally and spiritually
fascinating, refreshingly honest without being self-aggrandizing, full of humor
and sharp observation of the people and the landscape. Downie is a great
companion on the road.
— Imogen Robertson, author of Instruments of Darkness

David Downie’s pilgrimage/anti-pilgrimage has two things no one
else does. One is his inimitable wit. The other: he travels not just in space,
but in time, creating constant delightful surprise and reassuring familiarity.
An atheist who starts the Way of Saint James necessarily sees the world with a
certain irony. One who finishes the trail from Paris to the Spanish border
won’t let that irony consume him. It is the conversation between the two that
makes this such a special book.
— Andrew Riggsby, Professor of Classics and of Art History, The University of Texas at Austin

Perhaps the most evocative American book about Paris since A Moveable Feast.

David Downie is the master of educated
curiosity. With him we discover Paris, a seemingly public city that is, in
fact, full of secrets—great lives, lives wasted on the bizarre; forgotten artisans;
lost graves. I have walked some of the city’s streets with him, and reading
this book is just as tactile an experience.
— Michael Ondaatje

David Downie has called Paris and the Marais home since 1986. He has written for over 50 publications worldwide including Bon Appétit, The Los Angeles Times, Town & Country Travel, The San Francisco Chronicle, epicurious.com, and Salon.com. He is the author of the critically acclaimed Paris, Paris: Journey into the City of Light, three Terroir guides, as well as several cookbooks and crime novels. He lives with his wife, Alison Harris, a photographer, and creates custom tours via his "Paris, Paris Tours" blog site: http://parisparistours.blogspot.com/
Loading...
or
Not Currently Available for Direct Purchase