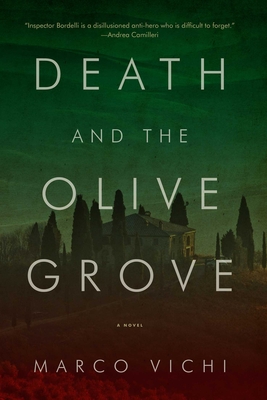 Death and the Olive Grove

April 1964, and the cruelest month is breeding bad weather and worse news. And plenty of disturbing news is coming to Florence detective Inspector Bordelli.Bordelli’s friend, Casimiro, insists he’s discovered the body of a man in a field above Fiesole. Bordelli races to the scene, but doesn’t find any sign of a corpse.Only a couple of days later, a little girl is found at Villa Ventaglio. She has been strangled, and there is a horrible bite mark on her belly. Then another young girl is found murdered, with the same macabre signature.And meanwhile Casimiro has disappeared without a trace.This new investigation marks the start of one of the darkest periods of Bordelli’s life: a nightmare without end, as black as the sky above Florence.

Praise For Death and the Olive Grove…

Discovering a new detective is a bit like making a new friend. A real find for anyone who likes their crime novels atmospheric, discursive, humorous, and thought-provoking.

Over the course of his police procedurals, Vichi shows us ever more secret and dark sides to an otherwise sunny and open city. But his happiest creation remains the character of Inspector Bordelli, a disillusioned anti-hero who is difficult to forget.
— Andrea Camilleri

Marco Vichi's novel Death in Florence won the Scerbanenco, Rieti, and Camaiore prizes. His novels Death in August and Death and the Olive Grove are available from Pegasus Crime.
Loading...
or
Not Currently Available for Direct Purchase