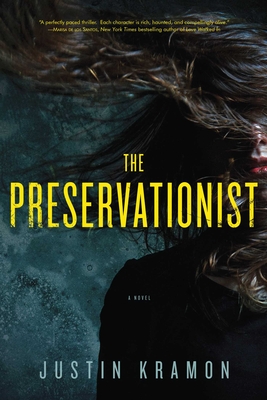 To Sam Blount, meeting Julia is the best thing that has ever happened to him. Working at the local college and unsuccessful in his previous relationships, he’d been feeling troubled about his approaching fortieth birthday, “a great beast of a birthday,” as he sees it, but being with Julia makes him feel young and hopeful. Julia Stilwell, a freshman trying to come to terms with a recent tragedy that has stripped her of her greatest talent, is flattered by Sam’s attention. But their relationship is tested by a shy young man with a secret, Marcus Broley, who is also infatuated with Julia. Told in alternating points of view, The Preservationist is the riveting tale of Julia and Sam's relationship, which begins to unravel as the threat of violence approaches and Julia becomes less and less sure whom to trust.

Praise For The Preservationist…

Justin Kramon's supporting characters are so quirky and funny, you'd swear they were drawn from real life...The Preservationist is a classic romantic triangle....Kramon has experienced the literary world's equivalent of overnight success.


The Preservationist effectively mixes literary thriller and realistic horror, as characters’ secrets are revealed with increasing creepiness, and the story moves...to unbearable foreboding as the three suspiciously circle one another, landing the reader in a happily torturous state of anxiety.


I couldn’t help but race through The Preservationist, the story was that urgent and perfectly paced.  Each of the characters, from the kindest to the creepiest, is rich, haunted, and compellingly alive.

What distinguishes this book is Kramon’s willingness to put predator and prey on almost equal footing: The predator is inhumane but not inhuman. A respectable thriller. Don’t be surprised if the movie appears at a multiplex near you.

Kramon has given readers one of the truly suspenseful books of the year...the pacing is perfect. Each chapter peels back the layers of evil and becomes progressively more chilling as each secret is revealed...Crime fans won't want to miss this one.

Which dude is the psycho killer? That's the question at the thumping heart of Justin Kramon's new thriller...Kramon's omniscient narrator peers into the minds of principal characters, and...all of them have something to hide.

This is not just a compelling suspense novel. It's also a genuine exploration of three damaged characters...Dark, unsettling and perceptive, The Preservationist is a vivid exploration of different conceptions of love - both true and truly twisted.

The Preservationist is laced with foreboding from the first page. Its plot cooks and simmers until it eventually boils over. Justin Kramon knows that crimes of the heart cut the deepest, and he proves himself one of our most versatile and insightful young writers working today.

The Preservationist offers that rare alchemy of page-turning suspense and first-rate writing. I raced to the explosive conclusion, then found myself haunted by it. One of my favorite thrillers of the year, it's a book you don't want to miss.

Justin Kramon is the author of the novel Finny (Random House, 2010). A graduate of the Iowa Writers' Workshop, he has published stories in Glimmer Train, Story Quarterly, Boulevard, Fence, TriQuarterly, Alaska Quarterly Review, and others. He has received honors from the Michener-Copernicus Society of America, Best American Short Stories, the Hawthornden International Writers' Fellowship, and the Bogliasco Foundation. He has taught undergraduate and graduate fiction writing courses at Gotham Writers' Workshop, Haverford College, the University of Iowa, Arcadia University, and elsewhere. He lives in Philadelphia.
Loading...
or
Not Currently Available for Direct Purchase