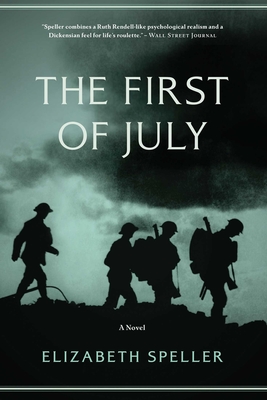 The First of July

This new novel from Elizabeth Speller tells the poignant and redemptive tale of the tragedies of war, as lives cross, dreams are shattered, and futures altered as the hours pass on the first day of the Battle of the Somme.On July 1st, 1913, four very different men are leading four very different lives. Exactly three years later, it is just after seven in the morning, and there are a few seconds of peace as the guns on the Somme fall silent and larks soar across the battlefield, singing as they fly over the trenches. What follows is a day of catastrophe in which Allied casualties number almost one hundred thousand. A horror that would have been unimaginable in pre-war Europe and England becomes a day of reckoning, where their lives will change forever, for Frank, Benedict, Jean-Batiste, and Harry.Elizabeth Speller once again sublimely captures the dangerously romantic atmosphere of war-torn Europe in her latest novel that will leave critics and readers astounded.

Praise For The First of July…

Utterly gripping and completely immersing.  As the war progresses, the soldier's stories converge in a pointillist portrait of the trench-riddled landscape and those upon whose frail shoulders the battle depends. Gritty, disturbing, moody, and intensely real, the novel’s psychological impact is like those of Mary Doria Russell’s A Thread of Grace and Denis Johnson’s Tree of Smoke and asks readers to consider war’s high costs. Great book-club fare.

Praise for the novels of Elizabeth Speller

World
War I history buffs will enjoy this mystery, as will fans of period
pieces. Readers who like Jacqueline Winspear’s Maisie Dobbs series will
savor this novel.

Elizabeth Speller studied Classics at Cambridge University. She is the author of The Return of Captain John Emmett and The Strange Fate of Kitty Easton, both of which received stellar critical acclaim. She lives in England.
Loading...
or
Not Currently Available for Direct Purchase