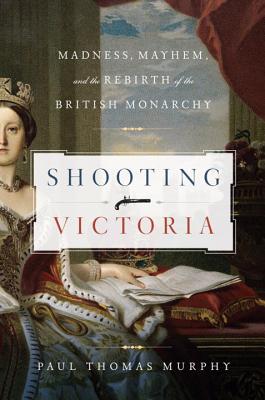 Madness, Mayhem, and the Rebirth of the British Monarchy

A history of Victorian England as seen through the eight assassination attempts on the queen's life, ranging from attacks by lone madmen to one of the first modern terrorist plots.

Shooting Victoria is historical narrative at its most thrilling, from the cloak and dagger nature of several of the assassination attempts, to Victoria’s brilliant responses to the attacks, alongside astute analysis of how these events actually revitalized the British monarchy at a time when monarchy was quickly becoming unpopular abroad. While thrones across Europe toppled, the Queen’s would-be assassins contributed greatly to the preservation of the crown and to the stability that it enjoys today.  After all, according to Victoria herself, “It is worth being shot at—to see how much one is loved.”

Paul Thomas Murphy is the author of Shooting Victoria, a New York Times notable book. He holds advanced degrees in Victorian Studies from Oxford and McGill Universities and the University of Colorado, where he taught both English and writing on interdisciplinary topics. He currently resides in Boulder, Colorado.

Praise For Shooting Victoria: Madness, Mayhem, and the Rebirth of the British Monarchy…

I would like to have been taught by him. He’s the most free-spirited of scholars. Shooting Victoria rambles uninhibitedly and learnedly through 19th-century history into literature, penology, constitutional theory and even ballistics, stimulating highly topical thoughts along the way.

Murphy
recounts in a fresh, lively narrative how these deluded subjects
managed to channel their mental instability or optimistic naïveté into
assassination attempts.

In
this delightful book, Murphy argues that the assassination attempts on
the queen during her nearly sixty-four-year reign cemented her
popularity, helping her create the modern monarchy.