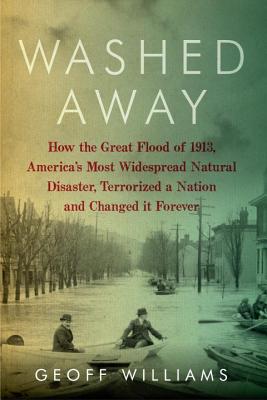 How the Great Flood of 1913, America's Most Widespread Natural Disaster, Terrorized a Nation and Changed It Forever

The incredible story of a flood of near-biblical proportions—its destruction, its heroes and victims, and how it shaped America's natural-disaster policies for the next century.

The storm began March 23, 1913, with a series of tornadoes that killed 150 people and injured 400.  Then the freezing rains started and the flooding began. It continued for days. Some people drowned in their attics, others on the roads when the tried to flee.

It was the nation's most widespread flood ever—more than 700 people died, hundreds of thousands of homes and buildings were destroyed, and millions were left homeless.

Geoff Williams is the author of C.C. Pyle's Amazing Foot Race: The True Story of the 1928 Coast-to-Coast Run Across America. For most of his life, Williams has lived less than an hour away from the Great Flood's epicenter in Dayton, Ohio.

Praise For Washed Away: How the Great Flood of 1913, America's Most Widespread Natural Disaster, Terrorized a Nation and Changed It Forever…

Williams
chronicles the devastation in a voice reminiscent of Mark Twain and
James Thurber. Williams proves a marvelous storyteller; Thurberian wit
and whimsy saturate the pages.  Williams' crisp and colorful vernacular
offers valuable insights on the causes of the Great Flood.

Williams weaves tragic and heroic stories of people in the various affected states into an almost hour-by-hour account of the deadly storm. This quick-reading history published for the storm’s centennial should interest readers who enjoyed Erik Larson’s Isaac’s Storm or Simon Winchester’s A Crack in the Edge of the World about the San Francisco earthquake of 1906.