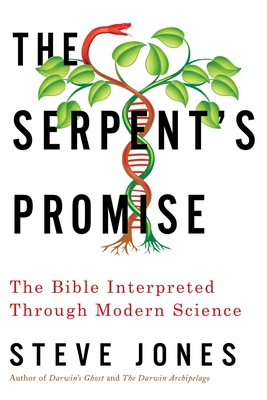 The Bible Interpreted Through Modern Science

From acclaimed geneticist Steve Jones, the story of the Bible as told through the lens of modern science.

In The Serpent's Promise, Steve Jones retells many of the Biblical tales in the light of modern science. Are we all descended from a real-life Adam and Eve? Are some—or all—of us marked with the molecular equivalent of original sin, and if so what can we do about it? Was the Bible's great flood a memory of the end of the Ice Age? And what can science tell us of the mystical experiences reported by the faithful, or of the origin of faith itself?

Some people deny the power of religious belief, others the findings of science. In this groundbreaking work from one of our great science writers, Steve Jones explores how these mysteries often overlap. He steps aside from the noisy debate between believers and non-believers to show how the questions that preoccupy us today are those of biblical times—and that science offers many of the answers.

At once brilliantly erudite and highly readable, The Serpent's Promise is a witty and thoughtful account of the greatest scientific story ever told.

Steve Jones is professor of genetics at University College London. He is the author of The Darwin Archipelago; Y: The Descent of Man; Darwin's Ghost; Almost Like a Whale: The Origin of Species; and The Serpent’s Promise. Jones is the winner of Royal Society Faraday Medal for the Public Understanding of Science. He lives in London.

Praise For The Serpent's Promise: The Bible Interpreted Through Modern Science…

[A] remarkably original approach to scripture.


It is always fun to compare past visions of cosmic truth with our own understanding of life and the universe. I cannot think of a wittier guide than Steve Jones.

Not just a ‘retelling’ of the Bible, but a critique of religion and a clarion call for science to replace it in human affairs. A charmingly miscellaneous scientific canvas. Jones writes with clarity and wit about tough technical issues, and has a natural pedagogue’s taste for the juicy fact.