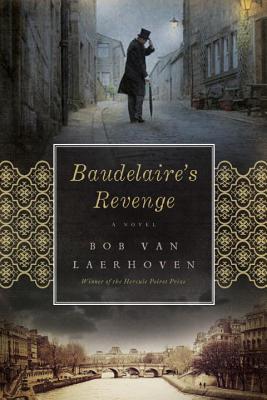 Winner of the Hercule Poirot Prize for Best Crime Novel of the Year. Winner of the USA Best Book Award 2014 in the category mystery/suspense.


It is 1870, and Paris is in turmoil. As the social and political turbulence of the Franco-Prussian War roils the city, workers starve to death while aristocrats seek refuge in orgies and séances. The Parisians are trapped like rats in their beautiful city but a series of gruesome murders captures their fascination and distracts them from the realities of war. The killer leaves lines from the recently deceased Charles Baudelaire’s controversial anthology Les Fleurs du Mal on each corpse, written in the poet’s exact handwriting. Commissioner Lefèvre, a lover of poetry and a veteran of the Algerian war, is on the case, and his investigation is a thrilling, intoxicating journey into the sinister side of human nature, bringing to mind the brooding and tense atmosphere of Patrick Susskind’s Perfume. Did Baudelaire rise from the grave? Did he truly die in the first place? The plot dramatically appears to extend as far as the court of the Emperor Napoleon III. A vivid, intelligent, and intense historical crime novel that offers up some shocking revelations about sexual mores in 19th century France, this superb mystery illuminates the shadow life of one of the greatest names in poetry.

Van Laerhoven packs much complexity into 256 pages, giving this historical mystery the heft of a far longer work.

Mystery aficionados will love this pastiche of Wilkie Collins and Edgar Allan Poe.

Van Laerhoven creates a splendidly decadent and noxious atmosphere. [His] prose is rich and perceptive, filled with philosophical and metaphysical speculations. A terrific mystery.

[A] decadent tale.  Commissioner Lefèvre’s philosophical discussions with artists and poets and a creepy Belgian dwarf are fascinating.

A superb historical tale of an embattled city. There are strong gothic-horror overtones, courtesy of a manuscript left behind by the killer, in which Baudelaire’s themes of sex and death are writ large. The flamboyantly lurid tone is hugely entertaining.

A superb historical tale of an embattled city. There are strong gothic-horror overtones, courtesy of a manuscript left behind by the killer, in which Baudelaire’s themes of sex and death are writ large. The flamboyantly lurid tone is hugely entertaining.

Vigorous.
A finely-tuned balancing act between style and content. Add to all this
the extremely convincingly painted tragic characters and the multitude
of mysterious figures, and what you get is a winner who gives added
luster to this jubilee edition of the Hercule Poirot Prize.

Its examination of evil reminds me of the "Shadow of the Wind" Gothic novel series, while the short chapters recall The DaVinci Code. Baudelaire’s Revenge is a more disturbing duel with the devil than either of those, with a cast of flawed, tormented characters who would have felt welcome in the company of Baudelaire himself.

Bob Van Laerhoven has written more than thirty books in Holland and Belgium.  Bob has become known for his colorful, kaleidoscopic novels in which the fate of the individual is closely related to broad social transformations.  He won the Hercule Poirot Prize in 2007 for his novel Baudelaire’s Revenge, now available in English for the first time. Visit his web site at www.bobvanlaerhoven.be.
Loading...
or
Not Currently Available for Direct Purchase