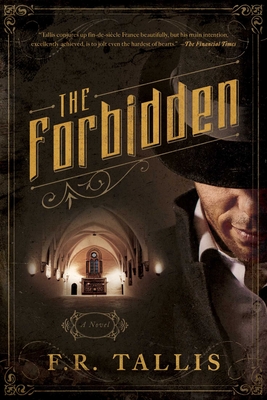 1873: When the ambitious Doctor Paul Clément takes a job on the island of Saint Sébastien, he has dreams of finding cures for tropical diseases. After witnessing the ritualistic murder of a young boy who was allegedly already dead, he is warned never to speak of what he has seen. Back in fin de siècle Paris, Paul’s attentions turn to studying the nervous system and resuscitation through electricity. Paul is told of patients who have apparently died, been brought back to life, and, while they lay between life and death, witnessed what they believed to be Heaven itself. Using forbidden knowledge he swore never to use, he at- tempts to experience what everyone else has seen, but something goes horribly wrong. When Paul returns to the land of the living, can it be possible that he brings something else back with him, an unspeakable evil so powerful it can never be banished?

Praise For The Forbidden…

Thrilling. What we have here is a proper scare-your-socks-off horror tale. Tallis weaves real historical figures into the narrative and conjures up fin-de-siècle France beautifully, but his main intention, excellently achieved, is to jolt even the hardiest of hearts.

F.R. Tallis plunges us into late-1800s Paris, all cathedral gargoyles, rustling silk and gaslight. We follow Dr. Paul Clément, a student of the budding field of neurology, whose particular interest is in resuscitation of the dead using electrical charges. Tallis populates his story with real historical figures of the time, and thanks to impressive research detailed in the afterword, creates a beautifully authentic style that never falters into anachronism. You might say it’s a 19th-century “Flatliners,” segueing into “The Exorcist."


Fans of Caleb Carr will feel right at home.