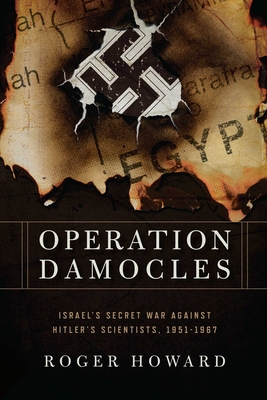 From 1951 to 1967, Egypt pursued a secret program to build military rockets that could have conceivably posed a threat to neighboring Israel. Because such an ambitious project required Western expertise, the Egyptian leader president Nasser hired West German scientists, many of them veterans of the Nazi rocket program at Peenemünde and elsewhere.These covert plans soon came to the attention of Israel’s legendary secret service, Mossad, and caused deep alarm in Tel Aviv. Could the missiles be fitted with warheads filled with radiological, chemical, or even nuclear materials? Israel responded by using threats, intimidation, and brutal assassination squads to deter the German scientists from working on Nasser’s behalf. Exactly half a century later, this book tells the gripping story of the mysterious arms dealers, Mossad assassins, scientific genii, and leading figures who all played their part in Operation Damocles

In the years following WWII, Egypt, under the guidance of president Nasser, recruited former Nazi scientists for their long-range rocket-development efforts. Howard’s conclusions are sound, and his briskly paced work is an entertaining read.

Embroidering this episode with the craft and occasional ruthlessness of espionage, Howard will interest readers of intelligence history.

A well-paced narrative as chock full of mysterious rev- elations as a good spy thriller.

Roger Howard is a British journalist and historian specializing in the Middle East. He is the author of the academic titles The Oil Hunters: Exploration and Espionage in the Middle East, 1880-1939 and Iran in Crisis? Roger’s articles have appeared in the Guardian, the London Times, the Daily Telegraph, the Independent, the Wall Street Journal, The Spectator, the New Statesman, the International Herald Tribune and many other newspapers and journals. He has a specialized knowledge of Middle Eastern defense issues, having written extensively on Iran’s nuclear program for RUSI and Chatham House.
Loading...
or
Not Currently Available for Direct Purchase