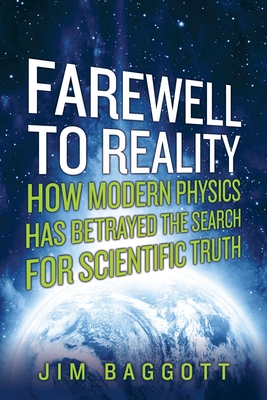 In this stunning new volume, Jim Baggott argues that there is no observational or experimental evidence for many of the ideas of modern theoretical physics: super-symmetric particles, superstrings, the multiverse, the holographic principle, or the anthropic cosmological principle. These theories are not only untrue, it is not even science. It is fairy-tale physics: fantastical, bizarre and often outrageous, perhaps even confidence-trickery. This book provides a much-needed antidote. Informed, comprehensive, and balanced, it offers lay readers the latest ideas about the nature of physical reality while clearly distinguishing between fact and fantasy. With its engaging portraits of many central figures of modern physics, including Paul Davies, John Barrow, Brian Greene, Stephen Hawking, and Leonard Susskind, it promises to be essential reading for all readers interested in what we know and don''''t know about the nature of the universe and reality itself.

Praise For Farewell to Reality…

Baggott has done something that I would have thought impossible in a popular book. He navigates successfully between the Scylla of mathematical rigor and the Charybdis of popular nonsense.

In consistently accessible and intelligent prose, Baggott sympathetically captures the frustrations of physicists while laying out a provocative—and very convincing—plea for a reality check in a field that he feels is now too “meta” for its own good.

Jim Baggott is an award-winning science writer. A former academic chemist, he maintains a broad interest in science, philosophy, and history, and writes on these subjects for New Scientist and other journals. His books have been widely acclaimed and include A Beginner's Guide to Reality (Pegasus, 2006), The First War of Physics (Pegasus, 2010), The Meaning of Quantum Physics (Oxford, 1992), and Beyond Measure Modern Physics, Philosophy, and the Meaning of Quantum Theory (Oxford, 2004). He lives in England.
Loading...
or
Not Currently Available for Direct Purchase