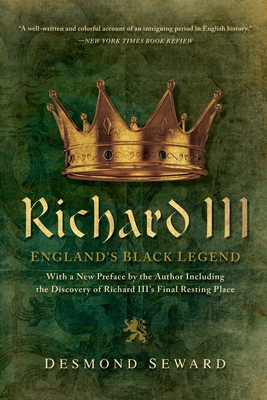 With the victory of Henry Tudor, the usurping dynasty made an effort to besmirch the last Plantagenet’s reputation, and some historians claim that Richard’s "black legend" is nothing more than political propaganda. Yet such an interpretation, as Desmond Seward shows in this powerfully-argued book, suggests a refusal to face the facts of history. Even in the king’s lifetime there were rumours about his involvement in the murders of Henry VI and of his nephews, the "Princes in the Tower," while his reign was considered by many to be a nightmare, not least for the king himself. The real Richard III was both a chilling and compelling monarch, a peculiarly grim young English precursor of Machiavelli’s Prince. Sweeping aside sentimental fantasy, this is a colorful, authoritative biography that offers a definitive picture of both the age and the man.

A well-written and colorful account of an intriguing period in English history.

Perhaps the best, and certainly the most readable, of recent biographies.
— John Julius Norwich, author of Shakespeare’s Kings and Queens

A
valuable addition to the file, a biography of strong feeling and firmly
held conviction arrived at after long thought. It is most readable.

Desmond Seward was born in Paris and educated at Cambridge. He is the author of many books, including The Hundred Years War; The Wars of the Roses; Eleanor of Aquitaine; Caravagio; and The Plantagenets. He lives in England.
Loading...
or
Not Currently Available for Direct Purchase