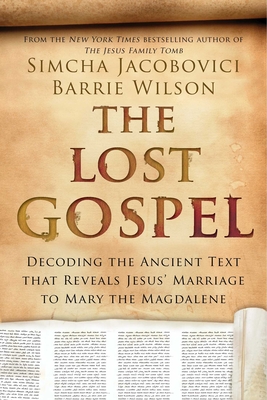 Gathering dust at the British Museum is an ancient manuscript of the early Church, written by an anonymous monk, at least 1,600 years old, providing the first ever translation from Syriac into English of a profound document—some twenty-nine chapters in length —that tells us the inside story of Jesus’ social, family, and political life. The Lost Gospel takes the reader on an exciting adventure through this highly informative ancient manuscript. After decoding the basic symbolism, something surprising and groundbreaking was discovered: confirmation of Jesus' marriage to Mary Magdalene the names of their two children; the towering presence of Mary Magdalene (a Gentile priestess), a serious plot on Jesus’ life in 19 C.E. prior to the crucifixion; an assassination plot against their children; Jesus’ connection to political figures at the highest level of the Roman Empire—Emperor Tiberius and his protégé Sejanus; a religious movement that antedates that of Paul—the Church of Mary Magdalene.

Praise For The Lost Gospel…


I very much enjoyed reading the book and find the major thesis of Jesus’ marriage to Mary the Magdalene very convincing. I also liked the style – very modern and conversational I thought it well-structured and convincing I have always felt that the emphasis on celibacy and the identification of sex with sin and corruption is extremely annoying. It is very much part of the denigration of women and their place in the natural order of things.
— Madelyn B. Dick, Ph.D., Professor Emerita and Senior Scholar, History, York University, Toronto

Simcha Jacobovici and Barrie Wilson have produced a rather impressive collaborative work [that] advances the hypothesis that the text belongs to a form of Gnostic Christianity in which a married Jesus with children was a core tradition that might well trace back to the historical Jesus. The public will find it fascinating, clerics will denounce it, and some academics will likely dismiss it as sensational—but it is well worth a careful read.
— James D. Tabor, Professor of Ancient Judaism and Early Christianity, University of North Carolina at Charlotte

The Lost Gospel [is] a tour-de-force, carefully documented. An important contribution to the on-going dialogue about Christian origins.

— Margaret Starbird, author of 'The Woman with the Alabaster Jar'

This discovery is potentially the last nail in the coffin of biblical literalism.
— John Dominic Crossan, author of 'God & Empire' [Praise for 'The Jesus Family Tomb']

A slick and suspenseful narrative. Jacobovici is a maverick, a self-made Indiana Jones.

Simcha Jacobovici is a three-time Emmy winning Israeli/Canadian filmmaker, New York Times bestselling author and an internationally acclaimed journalist. He is also an adjunct professor in the Department of Religion at Huntington University, Ontario, Canada. Jacobovici was Showrunner/Director of the 6-part series Enslaved: The Lost History of the Transatlantic Slave Trade for which he has received numerous awards including two NAACP Image Award nominations. Enslaved is his fourth book.  He divides his time between Toronto and Israel.