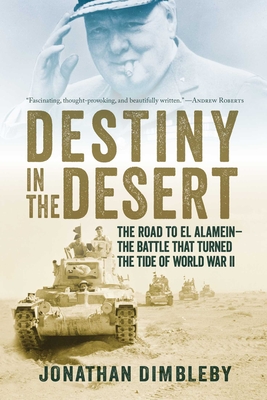 Destiny in the Desert (Paperback)

The Road to El Alamein: The Battle that Turned the Tide of World War II

The definitive history of the desert battle—”The end of the beginning,” as Churchill said— that changed the course of World War II .

It was the Allied victory at the Battle of El Alamein in November 1942 that inspired one of Churchill’s most famous aphorisms: “This is not the end, it is not even the beginning of the end, but it is, perhaps, the end of the beginning.”

In this thrilling historical account, Jonathan Dimbleby describes the political and strategic realities that lay behind the battle, charting the nail-biting months that led to the victory at El Alamein in November 1942.

Drawing on official records and the personal insights of those involved, Dimbleby creates a vivid portrait of a struggle which for Churchill marked the turn of the tide—and which for the soldiers on the ground involved fighting and dying in a foreign land.

Jonathan Dimbleby is a writer and filmmaker based in England. Destiny in the Desert was recently nominated for the Hessell-Tiltman History Prize.

Praise For Destiny in the Desert: The Road to El Alamein: The Battle that Turned the Tide of World War II…

A triumph. The pace of the narrative is tremendous and the judgments are fascinating. This is a brilliant effort - when confronted by work of this quality I get carried away by enthusiasm.
— Harold Evans, author of The American Century

A fine account of the 1940-1942 North African campaign. A great one-volume interpretation, the equal of Rick Atkinson's recent version.

Dimbleby's new perspective returns the Desert War to its deserved place as one of the pivotal campaigns of the Second World War.
— Niall Barr, author of 'Pendulum of War'

Dimbleby tells the story with confidence of a man who knows the historical terrain immediately.
or
Not Currently Available for Direct Purchase
Copyright © 2020 American Booksellers Association