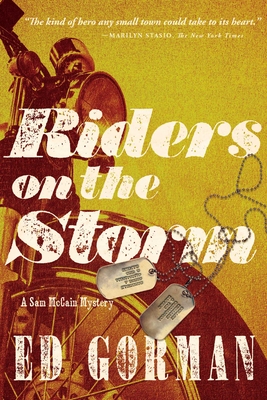 Riders on the Storm (Hardcover)

1967: A brutal murder in the midst of an anti-Vietnam War group sparks an investigation by Sam McCain, in Ed Gorman’s most politically charged mystery yet.

When we last saw Sam McCain he had been drafted to fight the war in Vietnam. But Sam’s military career ended in boot camp when he was accidentally shot in the head and forced to spend three months in a military hospital to recover.

Sam returns to his hometown of Black River Falls, where he works as a lawyer (and part-time investigator) for the court of the snobbish but amusing Judge Esme Ann Whitney.

When Cullen is found murdered, the obvious suspect is Steve Donovan, but Sam has serious doubts about the man’s guilt. At least three people had reasons to murder Cullen, and Sam begins to suspect he’ll discover even more as his investigation heats up, in this dynamic new politically charged mystery novel by a veteran of the form.

Praise For Riders on the Storm: A Sam McCain Mystery…

The kind of hero any small town could take to its heart.
— Marilyn Stasio

Gorman is a prolific, award-winning author, and the McCain series may be his best work. This is an extended, nuanced fictional biography with an occasional mystery thrown in. Great reading. Welcome home, Sam.

This sequel to Sam McCain’s eighth case, Ticket to Ride (2010), originally announced as his last, has got to be great news for fans of the sharpest investigator in yesteryear Iowa. The final revelation will take most readers by surprise.

Gorman captures the time period perfectly. Gorman cleverly transplants the classic elements of noir into the quiet cornfields of Iowa.

Ed Gorman is the poet of dark suspense.

Sam McCain has the rueful wisdom and charm of an exemplary hero who is curious not only about whodunit but also about some of the more elusive riddles of human existence.
or
Not Currently Available for Direct Purchase
Copyright © 2020 American Booksellers Association