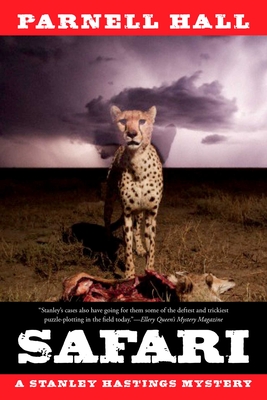 Stanley Hastings on safari? I don't think so. Neither did Stanley, until Alice's small inheritance—coupled with scrimping on a few luxuries like food and rent—allowed them to book a group trip to Zambia. Now the New York PI is hiking with lions, canoeing with hippos, and having close encounters with elephants and giraffes.It's a dangerous safari. The leader is a reckless, gun-ho, great white hunter who delights in leaping from the jeep with a hearty, "Come on, gang, let's see where this lion is going!" And a series of bizarre accidents quickly dwindles the group's numbers. Why was the guide's young spotter foolish enough to walk under a sausage fruit tree . . . just as one on the huge sausage fruits fell? How did the leaves of a poisonous plant wind up in a tourist's salad? Are these really accidents?A stabbing tips the scale. It's murder, and the only policeman in a hundred miles is a park ranger (whose only murder case was that of a ivory poacher shot dead in plain sight). It's up to Stanley to crack the case . . . if he can just avoid being eaten by a lion.

Hall’s smooth style, ready sense of humor, and unusual take on murders in an untamed yet confined setting provide an enjoyable outing for armchair travelers.

In a dry comic voice, Stanley narrates this account of his furtive investigation into three murders that the other tourists observe with remarkable sang-froid.
— Marilyn Stasio, 'The New York Times Book Review'

Stanley's cases have going for them some of the deftest and trickiest puzzle-plotting in the field today.

Parnell Hall is an Edgar, Shamus, and Lefty nominee, and is the author of the Stanley Hastings private eye novels, the Puzzle Lady crossword puzzle mystery series, and the Steve Winslow courtroom dramas. An actor, screenwriter, and former private investigator, Hall lives in New York City.
Loading...
or
Not Currently Available for Direct Purchase