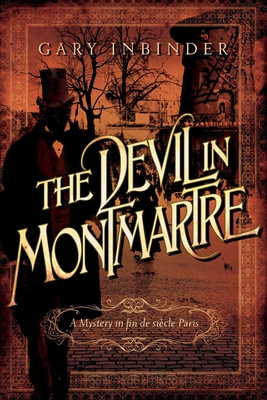 The Devil in Montmartre

When the mutilated corpse of a beautiful dancer is found in a Montmartre sewer, a nervous public fears that Jack the Ripper has crossed the Channel—but Inspector Achille Lefebvre has his own theories.

Amid the hustle and bustle of the Paris 1889 Universal Exposition, workers discover the mutilated corpse of a popular model and Moulin Rouge Can-Can dancer in a Montmartre sewer. Hysterical rumors swirl that Jack the Ripper has crossed the Channel, and Inspector Achille Lefebvre enters the Parisian underworld to track down the brutal killer. His suspects are the artist Toulouse-Lautrec; Jojo, an acrobat at the Circus Fernando, and Sir Henry Collingwood, a mysterious English gynecologist and amateur artist.

Pioneering the as-yet-untried system of fingerprint detection and using cutting edge forensics, including crime scene photography, anthropometry, pathology, and laboratory analysis, Achille attempts to separate the innocent from the guilty. But he must work quickly before the “Paris Ripper” strikes again.

Praise For The Devil in Montmartre: A Mystery in Fin de Siècle Paris (Achille Lefebvre Mysteries)…

Fin-de-siecle Paris comes brilliantly alive in The Devil in Montmarte. With an insidious conspiracy against Toulouse-Lautrec and a cast of characters including artists, writers, Can-Can dancers, and an evil circus clown, Gary Inbinder lays a plot as fascinating as the midnight streets of the Parisian Right Bank.

A satisfying mystery to the end. Highly recommended for Ripper fans and lovers of fin de siècle!

Inbinder's mystery debut shows Montmartre at its atmospheric best—inhabited by characters as diverse and devious as Paris can offer.”

Inbinder depicts a fascinating period in Parisian history with excellent detail, and Inspector Lefebvre’s techniques are intriguing, as they show the advent of modern forensics.

Has Jack the Ripper crossed the Channel? The savagery of the killing near the Moulin Rouge raises fears that the Ripper has resumed his slaughter. Plenty of precise period detail helps drive the plot.

A whodunit that combines a killer plot with skillful characterization. The reader comes away emotionally exhausted but exhilarated by the author’s first venture in the genre.

Has Jack the Ripper reemerged in Paris? Or did Toulouse-Lautrec, or any number of colorful suspects, dismember a beautiful young woman? With vivid historical detail, Inbinder takes us on a twisted journey through gaudy, gritty fin-de-siecle Paris to a shocking denouement.
— Barbara Corrado Pope, author of The Missing Italian Girl

Inbinder weaves a wonderful tale and hit plotting and pacing and right on the money. I always wished Caleb Carr had written more in his Alienist series—well, I have found my replacement.


A superbly crafted mystery from first page to last. A solid entertainment filled with unexpected plot twists and surprising turns, The Devil In Montmartre is truly extraordinary and very highly recommended.

Gary Inbinder's fiction, articles, and essays have appeared in Bewildering Stories, Halfway Down the Stairs, The Absent Willow Review, Morpheus Tales, Litsnack, Touchstone Magazine, and other publications. He is a member of both the Historical Novel Society and the Bewildering Stories Editorial Review Board. He lives in California.
Loading...
or
Not Currently Available for Direct Purchase