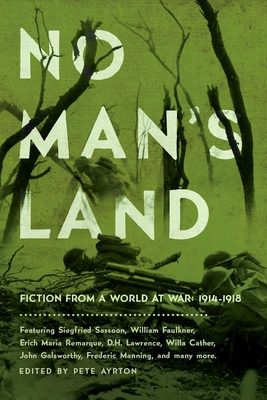 The Great War gave birth to some of the twentieth century's most celebrated writing; from D. H. Lawrence to Siegfried Sassoon, the literature generated by the war is etched into collective memory. But it is in fiction that we find some of the most profound insights into the war's individual and communal tragedies, the horror of life in the trenches, and the grand farce of the first industrial war.Featuring forty-seven writers from twenty different nations, representing all the main participants in the conflict, No Man's Land is a truly international anthology of World War I fiction.Work by Siegfried Sassoon, Erich Maria Remarque, Willa Cather, William Faulkner, and Rose Macaulay sits alongside forgotten masterpieces such as Stratis Myrivilis's Life in the Tomb, Raymond Escholier's Mahmadou Fofana, and Mary Borden's The Forbidden Zone. No Man's Land is a brilliant memorial to the twentieth century's most cataclysmic event.

Praise For No Man's Land…

Ayrton has achieved something very rare and powerful in this book, a brilliantly edited collection of fiction. Essential reading for anyone interested in history, literature, or the human condition.

Much of the fiction written during and after World War I centered on that carnage and its cost, physically, morally, politically. But for the most part, the voices have been English, or its American variant, with occasional French and German accents. No Man's Land is a valuable corrective.

An endlessly fascinating collection of bits and excerpts of fiction arising from the war. Ayrton’s No Man’s Land is hard reading almost from start to finish, but by its final pages it’s achieved the near-impossible feat of making the First World War’s horrors feel freshly, agonizingly new.


Harrowing but brilliant accounts of the human cost of war. In all its calculated costs of cruelty, its human impact, its formidable weapons of death and destruction and - yes - its futility, is captured brilliantly in this remarkable, wide-ranging anthology.

The real strength of No Man’s Land is the sheer diversity of the voices it offers, especially those from fronts often overlooked or considered peripheral in the United States and Britain. Both beautiful and ghastly.


Handsomely produced and aptly titled. The impressive number of other nationalities and other fronts it represents is unusual. Pete Ayrton's volume will undoubtedly send people in search of the books from which he has drawn such enticing extracts. Marvelous.

Pete Ayrton was born in London in 1943. After a brief period teaching philosophy, his work as a translator led to an editorial position and later to his founding of Serpent's Tail. No Man's Land, his collection of writings from World War I, was highly acclaimed on both sides of the Atlantic and was named one of the Economist's Books of the Year.
Loading...
or
Not Currently Available for Direct Purchase