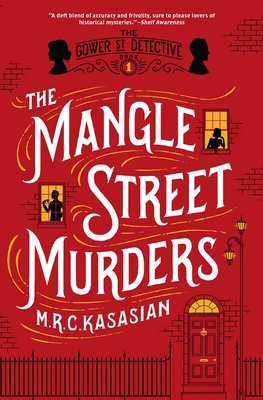 The first in a charming, evocative, and sharply plotted Victorian crime series starring a detective duo to rival Holmes and Watson.

After her father dies, March Middleton has to move to London to live with her guardian, Sidney Grice, the country’s most famous private detective.

It is 1882 and London is at its murkiest yet most vibrant, wealthiest yet most poverty-stricken. No sooner does March arrive than a case presents itself: a young woman has been brutally murdered, and her husband is the only suspect. The victim’s mother is convinced of her son-in-law’s innocence, and March is so touched by her pleas she offers to cover Sidney’s fee herself.

The investigations lead the pair to the darkest alleys of the East End: every twist leads Sidney Grice to think his client is guilty; but March is convinced that he is innocent. Around them London reeks with the stench of poverty and gossip, the case threatens to boil over into civil unrest and Sidney Grice finds his reputation is not the only thing in mortal danger.

M. R. C. Kasasian is the author of The Mangle Street Murders,The Curse of the House of Foskett, Death Descends on Saturn Villa, and The Secrets of Gaslight Lane, all available from Pegasus Crime. He divides his time between Suffolk and Malta.

Kasasian’s debut is an unflinching look at the darker side of Victorian London and a portrait of a heroine strong enough to stand up to a thoroughly disagreeable detective. Clever plotting, morbid humor, and colorful characters are a great treat.

One of the most delightful and original new novels of the year—the first in a series that could well become a cult.
or support indie stores by buying on
Copyright © 2020 American Booksellers Association