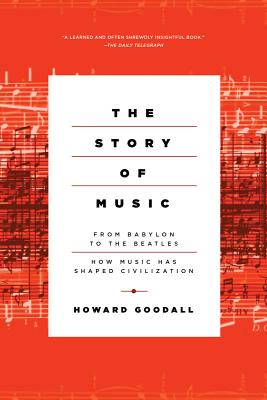 The Story of Music

Why did prehistoric people start making music? What does every postwar pop song have in common? A “masterful” tour of music through the ages (Booklist, starred review).


Music is an intrinsic part of everyday life, and yet the history of its development from single notes to multi-layered orchestration can seem bewilderingly specialised and complex.In his dynamic tour through 40,000 years of music, from prehistoric instruments to modern-day pop, Howard Goodall does away with stuffy biographies, unhelpful labels and tired terminology. Instead he leads us through the story of music as it happened, idea by idea, so that each musical innovation - harmony, notation, sung theatre, the orchestra, dance music, recording, broadcasting - strikes us with its original force. He focuses on what changed when and why, picking out the discoveries that revolutionised man-made sound and bringing to life musical visionaries from the little-known Pérotin to the colossus of Wagner. Along the way, he also gives refreshingly clear descriptions of what music is and how it works: what scales are all about, why some chords sound discordant and what all post-war pop songs have in common.The story of music is the story of our urge to invent, connect, rebel - and entertain. Howard Goodall's beautifully clear and compelling account is both a hymn to human endeavour and a groundbreaking map of our musical journey.

Praise For The Story of Music…

With playlists for each chapter, this is a masterful and illuminating whirlwind tour through thousands of years of musical history.

A celebrated British composer and broadcaster surveys the evolution and cultural significance of music, from prehistoric caves to Coldplay...Cultural history with some attitude and considerable rhythm and melody.

Howard Goodall is an EMMY, BRIT and BAFTA award-winning composer of choral music, stage musicals, film and TV scores, and a distinguished broadcaster. In recent years he has been England’s first ever National Ambassador for Singing, the Classical Brit Composer of the Year and Classic FM’s Composer-in-Residence. He was appointed Commander of the Order of the British Empire (CBE) in the 2011 New Year Honours for services to music education.
Loading...
or support indie stores by buying on
(This book is on backorder)