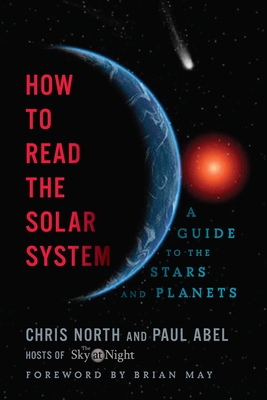 How to Read the Solar System (Hardcover)

A Guide to the Stars and Planets

By Paul Abel, Brian May, Chris North (Foreword by)

A fresh and essential guide to understanding and interpreting the wonders of our solar system, from two intrepid young astronomers who are the hosts of the popular BBC television series, "The Sky at Night."

What exactly is the solar system? We've all learned the basics at school but do we really understand what we are seeing in the night sky? Expert astronomers Chris North and Paul Abel, provide a fascinating guided tour of our Solar System and explain its many wonders.

They look at all the major players, including our more familiar cosmic neighbors—the Sun, the planets and their moons—as well as the occasional visitors to our planet—asteroids, meteors and comets—in addition to distant stars and what might lie beyond our Solar System, including the mysterious Earth Mark II? North and Abel recount the history of how our Solar System came to be, and the myths that once shaped astronomy. Through their cogent explanations of the latest scientific discoveries, they reveal how any amateur astronomer can view and interpret the Solar System and enrich their understanding of our universe.

Paul G. Abel is a British astronomer, mathematician, broadcaster and writer. Currently, he is based in the Centre for Interdisciplinary Science in the department of Physics & Astronomy at the University of Leicester where he teaches Mathematics. He is a presenter for the BBC's "The Sky at Night" program and has written for many popular astronomy magazines, focusing on how amateur astronomers can contribute to the field.

Dr. Brian May, founding member of Queen, has a PhD in Astronomy and is the co-author of Bang! The Complete History of the Universe and The Cosmic Tourist

Chris North is a professor at Cardiff University and received his doctorate from Oxford. He is part of BBC Televisions popular series "The Sky at Night," and works on two astronomical satellites: the European Space Agency's Herschel and Planck missions.  He lives in Wales.

Praise For How to Read the Solar System: A Guide to the Stars and Planets…

A highly accessible introduction to basic astronomy. The authors comprehensively cover all the basics, making this book a great primer for readers who are just getting started in their reading on the subject. This chatty, non-technical discussion is perfect for the armchair or budding astronomer who wants a bit of background and history spread widely across the field.

This fascinating read supported by the latest research will engage and enchant. Recommended for anyone with an interest in astronomy and fans of the show Cosmos with Neil deGrasse Tyson.


An
entertaining and basic introduction to the planets and other objects in Earth's
solar system.