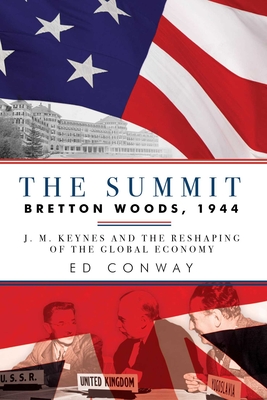 The idea of world leaders gathering in the midst of economic crisis is now familiar. But 1944's meeting at Bretton Woods was different. It was the only time countries agreed to overhaul the structure of the international monetary system. Their resulting system presided over the longest period of growth in history. Its demise decades later was at least partly responsible for the financial collapse of the 2000s.But what everyone has assumed to be a dry economic conference was in fact replete with drama. The delegates spent half the time at each other's throats and the other half drinking in the bar. All the while, war in Europe raged on.The heart of the conference was the love-hate relationship between John Maynard Keynes — the greatest economist of his day, who suffered a heart attack at the conference — and his American counterpart Harry Dexter White (later revealed to be passing information to Russian spies). Both were intent on creating a settlement which would prevent another war while at the same time defending their countries' interests.Drawing on unpublished accounts, diaries, and oral histories, The Summit describes the conference in stunning color and clarity. Written with exceptional verve and narrative pace, this is an extraordinary debut from a talented new historian.

Praise For The Summit…

A gripping story for both general readers and scholars interested in World War II, the Cold War, and domestic and international political economy. The author knows how to write for those who are less informed about economics while telling the history of the turbulent conference through its leading characters and updating its legacy today. An essential purchase on this topic.

In his gripping account of an exhausting three weeks in 1944, during which the IMF and the World Bank came into being, Ed Conway tells how the participants set out to rid the global economy of the types of dangerous imbalances that lie at the root of the eurozone’s current predicament.

Bretton Woods was a response to a problem that bedeviled international markets in the 1930s and bedevils them today. It was a marked success. Conway uses a wide range of archives, including recently available Soviet files. A sweeping account.

With no false modesty, Conway calls [Bretton Woods] ‘a gripping tale,’ and he is right on target. A lively writer, he keeps the reader fully engaged from start to finish: everything you could wish for about Bretton Woods and its aftermath. Mr. Conway is as sound in his judgments as his scope is wide and his analyses probing.

Brimming with the sort of vivid details that make the past come alive, The Summit is both an impressive work of scholarship and an absolute delight to read.

A compelling portrait of the event, which took place on the international stage of big-power geopolitics and was driven by long-range changes in monetary relations. The scope of the subject matter is impressive, and the execution is outstanding.

Stellar. The Summit manages to be a near-perfect blend of complexity and readability. Using an unprecedented number and variety of primary sources (many of which have never been mined before, making this quite the best book on the subject), Conway tells a tangled story of personalities and policy minutiae at a conference whose seismic after-effects are still being felt today, and Conway is every bit as masterful in detailing those after-effects as he is at telling the main story.

Bretton Woods was a response to a problem that bedeviled international markets in the 1930s and bedevils them today. It was a marked success. Conway uses a wide range of archives, including recently available Soviet files. A sweeping account.

An entertaining and insightful history. Readers will love how Conway skillfully brings to life the goings-on in what the British snobbily called ‘the monstrous monkey house’ of Bretton Woods.

The Summit will hold the attention of a wide audience. Conway presents a balanced array of economic issues and human interest stories. This is a complicated story, but Ed Conway tells it well.


As a financial journalist, Conway is drawn to the human dimension of the saga. He devotes as much attention to the ambience of the decaying Mount Washington Hotel and highlights the personalities of the negotiators as much as the national interests they represented. While there are countless stories of heroism on the battlefields in France, Conway brings us the story of a different sort of heroism that was brought out in the halls of the Mount Washington Hotel in rural New Hampshire.

Brilliantly researched, and hugely entertaining, this is an essential book about one of the most important economic events of the twentieth century.
— Keith Lowe, author of Savage Continent