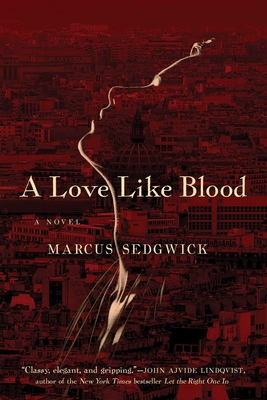 In 1944, just days after the liberation of Paris, Charles Jackson sees something horrific: a man in a dark tunnel, apparently drinking the blood of a murdered woman. Terrified, he does nothing, telling himself afterward that worse tragedies happen during war.Seven years later he returns to the city—and sees the same man dining in the company of a fascinating, beautiful young woman. When they leave the restaurant, Charles decides to follow . . .A Love Like Blood is a dark, compelling thriller about how a man's life can change in a moment and about where the desire for truth—and revenge—can lead.

Sedgwick’s books for young people are often dark and atmospheric, filled with vivid images and packed with horror, beauty and suspense. Perhaps it's no surprise, then, that in his adult debut, A Love Like Blood, Sedgwick turns to a classic subgenre of horror fiction: the vampire story.


YA author Sedgwick (Midwinter Blood) shifts triumphantly to adult fiction with this moving and multifaceted thriller. Sedgwick maintains a high level of tension up until the devastating conclusion.


This adult debut portends a tremendous second act from acclaimed YA author Sedgwick. Sedgwick’s prose is nothing short of gorgeous. Here’s a novel that tastes of blood and dust, just as a fine old-fashioned horror novel should.

An intense narrative. In this macabre psychological thriller, Sedgwick offers atmospheric settings and a relentless, chilling plot that gives a whole new meaning to the idea of ‘blood feud.’

Marcus Sedgwick is a widely admired, prizewinning author of YA fiction. His books have been shortlisted for over thirty awards, including the Carnegie Medal (five times), the Edgar Allan Poe Award (twice) and the Guardian Children's Fiction Prize (four times). He has won the Branford Boase award for his debut novel, Floodland, and the Booktrust Teenage Prize for My Swordhand is Singing. This first novel for adults.
Loading...
or
Not Currently Available for Direct Purchase