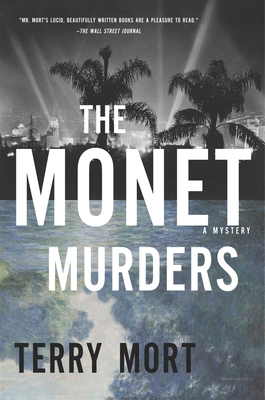 Hollywood, 1934. Prohibition is finally over, but there is still plenty of crime for an ambitious young private eye to investigate. Though he has a slightly checkered past, Riley Fitzhugh is well connected in the film industry and is hired by a major producer—whose lovely girlfriend has disappeared. He also is hired to recover a stolen Monet, a crime that results in two murders initially, with more to come.Along the way Riley investigates the gambling ships anchored off L.A., gets involved with the girlfriend of the gangster running one of the ships, and disposes of the body of a would-be actor who assaults Riley’s girlfriend. He also meets an elegant English art history professor from UCLA who helps Riley authenticate several paintings and determine which ones are forgeries. Riley lives at the Garden of Allah Hotel, the favorite watering place of screenwriters, and he meets and unknowingly assists many of them with their plots. Incidentally one of these gents, whose nom de plume is ‘Hobey Baker,’ might actually be F. Scott Fitzgerald . . .Evoking the classic hardboiled style, The Monet Murders is a charmingly cosy murder mystery by a novelist whose "lucid, beautifully written books are a pleasure to read." (The Wall Street Journal)

Praise For The Monet Murders…

A breezy debut noir set in Tinseltown circa 1934. Mort (The Hemingway Patrols) generally keeps the banter-filled proceedings as bubbly as the beverage his handsome protagonist frequent shares with a number of knockouts. Readers will hope to see more of Bruno.


The
terms noir and delightful usually aren’t used together, but they pair up
happily in this entertaining romp. Mort has fun with noir conventions but never
mocks them—a difficult trick to bring off and he does it masterfully.

A romp through the lighter side of the noir detective life. Readers may recognize some of the characters from real life (is that F. Scott Fitzgerald?), and all will enjoy how Mort makes Riley the pivot point of this fast-paced adventure.

Terry Mort writes hard-boiled detective fiction like we all imagine it was once written. Enjoyable and entertaining.

Terry Mort studied English literature at Princeton University. Later he served as an officer in the navy, including a lengthy deployment to Vietnam. He is the author of a book on fly-fishing and, most recently, The Hemingway Patrols and The Wrath of Cochise. He has also edited works by Mark Twain, Jack London, and Zane Grey. He lives with his wife in Sonoita, Arizona.
Loading...
or
Not Currently Available for Direct Purchase