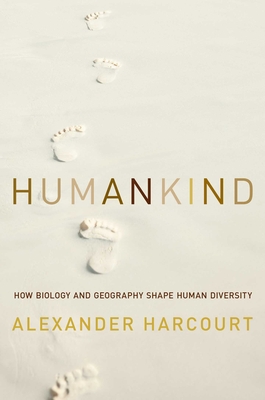 Where did the human species originate, why are tropical peoples much more diverse than those at polar latitudes, and why can only Japanese peoples digest seaweed? In Humankind, U. C. Davis professor Alexander Harcourt answers these questions and more, as he explains how the expansion of the human species around the globe and our interaction with our environment explains much about why humans differ from one region of the world to another, not only biologically, but culturally. What effects have other species had on the distribution of humans around the world, and we, in turn, on their distribution? And how have human populations affected eachother’s geography, even existence? For the first time in a single book, Alexander Harcourt brings these topics together to help us understand why we are, what we are, where we are. It turns out that when one looks at humanity's expansion around the world, and in the biological explanations for our geographic diversity, we humans are often just another primate, just another species. Humanity's distribution around the world and the type of organism we are today has been shaped by the same biogeographical forces that shape other species.

Alexander H. Harcourt is Professor Emeritus in the Anthropology Department at the University of California, Davis. He is the coauthor of Gorilla Society and Human Biogeography and co-editor of Coalitions and Alliances in Humans and Other Animals. He lives in Davis, California.
Loading...
or
Not Currently Available for Direct Purchase