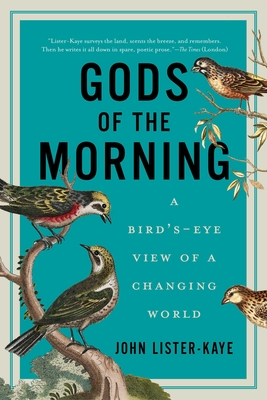 Gods of the Morning

Gods of the Morning follows the year through the turning of the seasons at Aigas, the Highlands estate John Lister-Kaye has transformed into a world-renowned wildlife center. John's affection, wisdom and lyricism sings off every page, bringing the natural world around him to life: from the rookery filled with twenty-nine nests and distinct bird calls to descriptions of the winter morning light, from the wood mice and the squirrels preparing for winter to tracking a fox's path through the snow. In particular it brings John's lifelong love of birds—his gods of the morning—to the fore. In the Highland glens, bird numbers plummet as their food supplies —natural fruits and every kind of creeping, crawling, slithering or flying bug—begin to disappear. By the first frosts the hills will have emptied down to a few hardy stalwarts such as the golden eagles, the raven and the irrepressible hooded crows. Silence settles across the land. The few species that are left frequent a changed world. Soon only the buzzards and wood pigeons will hang on in the woods and the coniferous forests will be host to flocks of chaffinches, tits, siskins, and crossbills passing through.

Praise For Gods of the Morning…

An
earnest and impassioned meditation on the natural environment. Insightful.
Whether dealing with small birds or larger animals, Lister-Kaye reminds readers
of the connections humans forge every day with other creatures—and the emotions
that result are unquestionably real and significant.

Though Lister-Kaye warns of the damage caused by humankind, and sometimes strikes an elegiac note, he sings full-throatedly in praise of the persistence of nature.

Lister-Kaye is a gifted writer, braiding memories of childhood and wide-ranging journeys as a naturalist with the rhythms of life at Aigas, a lace he knows intimately. Aigas, however, is becoming less familiar...he knows too much to settle for simple answers. Gods of the Morning perfectly encapsulates the paradoxical relations human beings have to the natural world. The sense of personal stewardship and individual responsibility that Lister-Kaye embodies is a vital element of conservation, as important as the understanding that wildlife belongs to nobody, and to everybody. We are all lords of the manor; the only question is how well we will do our jobs.


I love this book. No one writes more movingly, or with such transporting poetic skill, about encounters with wild creatures.
— Helen Macdonald, New York Times bestselling author of 'H is for Hawk'

With an untameable enthusiasm and generosity of spirit, Lister-Kaye translates those languages into a kind of inter-species friendship.
— Jay Griffiths, author of 'Wild: An Elemental Journey'

To read Gods of the Morning is to sink back into the grass, slip away from rush-hour traffic and conference calls, and notice once again the bugs circling in the dirt and that first hint of fall in the air. Lister-Kaye, who time and again homes in on familiar subjects, stripping away pretensions and introducing the vigor and realism that’s often missing from nature writing. After all, what is nature writing if not a tacit endorsement for bucking the trail? Gods of the Morning is a book you’ll want to put down, not because you’ve lost your interest, but precisely because you’ve found it—in the birds outside your window, in the grass beneath your feet, in the moonlight between the trees.


A
distinguished British naturalist reflects on his encounters with the birds of
the Scottish Highlands and how global warming has impacted these populations.
An evocative and heartfelt examination of a beautiful landscape and its fauna.

A quiet but rousing call to action for anyone who loves the natural world and wants to help preserve it.

Exquisitely observed and deeply evocative, Gods of the Morning is a joyful affirmation of the changing seasons, the wonders of wildlife, and the value of living close to nature. Generous, poetic, and wise.

A triumph in nature writing.
— Tristan Gooley, author of 'The Natural Navigator'

Lister-Kaye's writing hums with enthusiasm, and his observations are acute.

John Lister-Kaye is one of Britain's foremost naturalists and conservationists. He is the author of eight books on wildlife and the environment and has lectured on three continents. His last book At the Water's Edge was published by Canongate in 2010 to excellent reviews. He has served prominently in the RSPB, the Nature Conservancy Council, Scottish Natural Heritage and the Scottish Wildlife Trust. In 2003 he was awarded an OBE for services to nature conservation. He lives with his wife and family among the mountains of the Scottish Highlands, where he runs the world-famous Aigas Field Centre.
Loading...
or
Not Currently Available for Direct Purchase