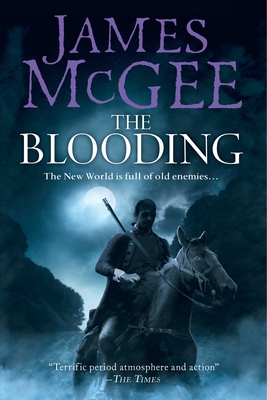 Hawkwood finds himself behind enemy lines in America during the war of 1812—for fans of Bernard Cornwell, Conn Iggulden and Patrick O'Brien

1812: Matthew Hawkwood, soldier turned spy, is stranded behind enemy lines, in America, a country at war with Britain.

Heading for the safety of the Canadian border, Hawkwood’s route takes him to Albany, where the chance sighting of a former comrade-in-arms—Major Douglas Lawrence—within a consignment of British prisoners stymies to his plans. For as the two men make their escape they uncover an American plot to invade Canada. If it is successful, the entire continent will be lost. The British authorities must be warned.

Pursued by a relentless enemy, Hawkwood and Lawrence set off across the snow-bound Adirondack Mountains; the land the Iroquois call ‘The Hunting Grounds’. But they are not alone.


Praise For The Blooding: A Novel…

The pace is fast and never beyond belief, making
for a most exciting story. This entertaining adventure is not just for those who
enjoy American historical fiction or war stories. Readers who like their spies
with quick wits and fists may want to start here and then return to the start
of the series.

McGee
blends in historical references to Sir John Johnson, Zebulon Pike, and the
Lake Champlain paddle steamer Vermont. There's also insight into the troubled
history between the Six Nations and white settlers. Hawkwood's a hero to root
for, especially with the addition of an intriguing back story. Captivating
action, page upon page, from a Regency-era Bond or Bourne.

James McGee grew up in Gibraltar, Germany, and Northern Ireland. He has traveled extensively in Europe, the United States, Australia and the Far East, but nowadays resides in Somerset, England. Five books from his Hawkwood series are available from Pegasus Books: Hawkwood, Resurrectionist, Rapscallion, Rebellion and The Blooding.
or
Not Currently Available for Direct Purchase