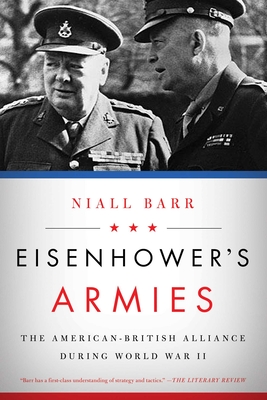 An authoritative and dramatic behind-the-scenes history of 'the Atlantic Alliance' during World War II.

The Anglo-American relationship from 1941-1945 proved to be the most effective military alliance in history. Yet there were also constant tensions and disagreements that threatened to pull the alliance apart. This book highlights why the unprecedented level of cooperation between the very different American and British forces eventually led to victory but also emphasizes the tensions and controversies which inevitably arose. Based on considerable archival research on both sides of the Atlantic, this work considers the breadth and depth of the relationship from high-level strategic decisions, the rivalries and personalities of the commanders to the ordinary British and American soldiers who fought alongside one another. The book also looks back and demonstrates how the legacy of previous experience shaped the decisions of the war.

Eisenhower's Armies is the story of two very different armies learning to live, work, and fight together even in the face of serious strategic disagreements. The book is also a very human story about the efforts of many individuals—famous or otherwise—who worked and argued together to defeat Hitler’s Germany. In highlighting the cooperation, tensions, and disagreements inherent in this military alliance, this work shows that Allied victory was far from pre-ordained and proves that the business of making this alliance work was vital for eventual success. Thus this dynamic new history provides a fresh perspective on many of the controversies and critical strategic decisions of World War II. As such, this book provides expert analysis of the Anglo-American military alliance as well as new insights into the ‘special relationship’ of the mid-twentieth century.

"In Eisenhower’s Armies, British military historian Niall Barr shows how two very different military structures were welded into a single military force. His long view, along with his ability to appreciate the perspectives of both bulldog and tomcat, is instructive to readers interested in the military side of the Anglo-American alliance. An admirable study of the bayonet’s edge of the ‘Special Relationship.’"
— Wall Street Journal

"In a splendid new book, Niall Barr provides us with an engrossing account."
— BBC History Magazine

"An astute and engrossing history of how two separate nations deployed two immense armies in a war of freedom."
— Bookreporter

"Barr becomes the current standard for a comprehensive history of the campaign."
— Booklist (starred review)

"A riveting, knowledgeable account. A fresh perspective into this ‘special relationship’ between Britain and the United States at a pivotal point in time. This dramatic work isn’t just for military historians or World War II scholars. Highly recommended for students of World War II and of the Atlantic Alliance of the mid-20th century and is a great read for anyone interested in leadership, decision making, international relations and diplomacy, and 20th-century history."
— Library Journal

"Offers an in-depth and engrossing study of the relationship between Britain and the U.S. from 1941 to 1945. Where many other studies adopt a singular approach in the process, this wider-reaching examination delves into the relationship between British and American armies themselves throughout the conflict. The result is a powerful survey that succeeds where others fail: in pinpointing the underlying influences, controversies, and struggles made on both sides during World War II. No military history collection should be without this."
— Midwest Book Review

"Excellent and engaging. This is a fascinating and dramatic tale and Barr tells it very well. Recommended."
— The Journal of Military History

"A detailed yet accessible military history. Relying on sound scholarship and writing for a general audience, Barr guides readers through the numerous ups and downs of the fraught relationship and highlights dramatic moments of both crisis and success."
— Publishers Weekly

"A very considerable achievement by one of the best of the younger generation of British military historians."
— Gary Sheffield, Military Illustrated

"Barr makes his specific focus the army: as a military historian, he is strong on strategy, tactics, consequences, and the manifold frustrations and disasters that could be caused by simple accidents of weather or geography. Barr is keen to demonstrate that the troops on the ground usually — after initial wariness ­— found a great deal of mutual admiration. The shared respect between these servicemen from different nations who fought for a free world is an inspirational story."
— The Telegraph (London)

"Niall Barr's prose is lean and his narrative moves quickly. He has produced a masterful, impressively researched history detailing the machinery of wartime decision-making, as well as the military alliance, led by Eisenhower, that defeated Hitler's Germany."
— The Weekly Standard

Niall Barr is a Senior Lecturer in Defence Studies at the Defence Studies Department, King's College, London. He has previously taught at St Andrews and the Royal Military Academy. His main research focus concerns twentieth century military history. He has published numerous military histories including Amiens to the Armistice; Flodden 1513; Pendulum of War: The Three Battles of El Alamein; and The Lion and the Poppy. He lives in Oxfordshire with his family.
Loading...
or
Not Currently Available for Direct Purchase