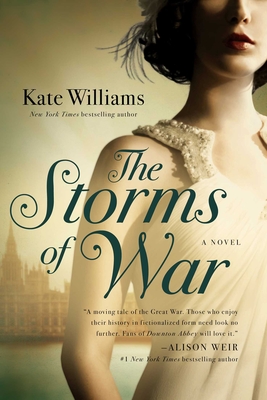 The Storms of War

In the idyllic early summer of 1914, life is good for the de Witt family. Rudolf and Verena are planning the wedding of their daughter Emmeline, while their eldest son, Arthur, is studying in Paris, and Michael is just back from his first term at Cambridge. Celia, the youngest of the de Witt children, is on the brink of adulthood and secretly dreams of escaping her carefully mapped-out future and exploring the world.But the onslaught of war changes everything and soon the de Witts find themselves sidelined and in danger of losing everything they hold dear. As Celia struggles to make sense of the changing world around her, she lies about her age to join the war effort and finds herself embroiled in a complex plot that puts not only herself but those she loves in danger.With gripping detail and brilliant empathy, Kate Williams tells the story of Celia and her family as they are shunned by a society that previously embraced them, torn apart by sorrow, and buffeted and changed by the storms of war.

Praise For The Storms of War…

Touching on topics as wide ranging as the horrors of trench warfare, battlefield hospitals, women-volunteer ambulance drivers, women’s suffrage, and blatant discrimination, this detailed, descriptive novel brings an era to life. As atmospheric as Anne Perry’s WWI books and as spellbinding as Ken Follett’s Fall of Giants.


Quietly impressive. It echoes of classic novels (Atonement, Brideshead Revisited). Hard to put down. A new perspective on an old war. Gripping, thoughtful, heartbreaking, and, above all, human.


Shades of Downton, with a dash of Atonement.


The new novel by the historian Kate Williams, is an epic story about a young woman whose idyllic world is shattered by the First World War.

A big juicy drama set on the eve of the First World War. Kate Williams paints a spellbinding portrait of a family clinging on desperately to their privileged way of life.

Kate Williams in a vivid writer, conjuring atmosphere through scents and tastes as well as period props.

Williams keeps her story moving and the result is a vivid portrait of a perennially fascinating period of history.

This terrific saga comes with a fascinating twist. Williams has a gift for showing how great movements in history affect the lives of people caught up in them.

A beautifully conjured family saga. Fans of Downton Abbey will love it.